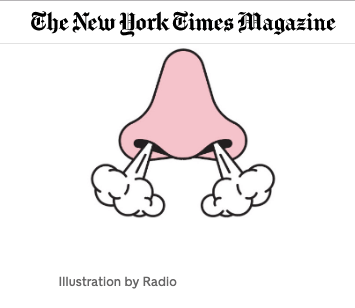 “Your nose is an intricate air filter, navigation tool, and mood enhancer all in one. Use it; suck in that air; smell the world you live in.”

In 2009, The New York Times pioneered to change what people think about breathing. Jane E. Brody wrote an article about the Buteyko Breathing Center (at that time Buteyko Center USA) and Dr. Buteyko’s discoveries regarding asthma. Thanks to this publication, people all over the world began realizing that over-breathing could cause various health issues, including asthma and other respiratory problems.

After this article came out, the Breathing Center’s phones were ringing off the hook: asthmatics wanted to know more about the Buteyko method. Many callers stated that the article was the first piece of information about asthma, which made sense to them. It also gave them hope and showed a path to recovery. Here is a testimonial of Michael Gosselin who had been terrorized by asthma for many years. After reading the NYT article, he drove to the Breathing Center’s office. At that time, his Positive Maximum Pause was below 1 second, and consequently, his asthma symptoms were ferocious. After learning Buteyko, Michael became free of breathing difficulties and medication.

Here is another remarkable testimonial by Jesse Steinberg: in 2009, he decided to take a weekend workshop on Breathing Normalization to tame his severe asthma. During the event, he talked to Thomas, a co-founder of the Breathing Center, and expressed his wish to master the Buteyko method. Thomas invited Jesse to work in our office in exchange for learning Breathing Normalization further. The day Jesse began his work was the day when the NYT article was published. Suddenly, Jesse found himself answering questions of asthmatics from many countries about how to breathe less. Today Jesse Steinberg works as a Breathing Normalization Specialist teaching adults and children how to improve their health by reducing their air consumption.

The New York Times continues educating people regarding the connection between health and breathing. Recently the New York Times Magazine published an article titled “How To Be A Nose Breather”. The author emphasizes various health benefits created by nasal breathing and problems triggered by mouth breathing. She wrote: Scientists link habitual mouth breathing to a host of medical issues, including sleep problems, learning disorders, tooth decay, bad breath and jaw deformities in children. Plus, a new study suggests that there may be a legitimate basis for mouth breather being slang for a stupid person. Japanese researchers obstructed the nostrils of young rats, forcing them to breathe through their mouths, and two weeks later found that the rodents needed twice as long to navigate a maze and had developed fewer brain cells than their unobstructed counterparts. There are very few things that people can do to improve their health as much as simply switching to nasal breathing, says Michalak, who tapes his mouth shut every night and claims he can spot mouth breathers in a crowd of strangers by looking at their jaws. Click here to read the full article.

I did not know about this article until my client informed me about it. Paula sent me a link to it together with her testimonial. Paula, who is 66 years old and had been impacted by asthma for twenty years, meticulously documented all the changes she had been experiencing while taking our Breathing Normalization Training and Breathing Optimization Training programs. After being a mouth breather for her entire life, she finally learned how to become a nose breather. It was not easy, but certainly rewarding. She noticed many health improvements, which other holistic and alternative modalities failed to deliver. Please read Paula’s testimonial to learn more. Thank you, Dr. Buteyko, for keeping changing people’s lives and improving our well-being.

It is fortunate that Dr. Buteyko‘s discovery and necessity of Breathing Normalization are becoming more recognized by major media.