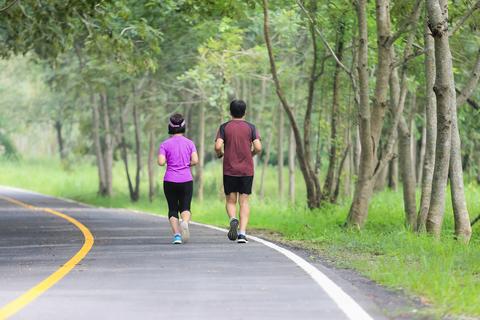 Jog and Run To Normalize Your Breathing

They brought him to a reception room on a stretcher. Awaiting his heart surgery, the flight to this remote city in Siberia was too daunting on Evgeniy. He felt self-conscious lying down while greeting Dr. Buteyko; it was unbearable to accept himself as an invalid. His mind still held on to his image before a sudden heart attack shattered his life. Just a while ago, Evgeniy was an internationally acclaimed cameraman, well-traveled and inseparable from his over-sized bags of cinematographic equipment. Those bags were heavy! In 1988, just a video camera weighed more than thirty-five pounds.

And who is he going to become now? His cardiologist was adamant: You will never shoot films any more. And just as this piece of news wasn’t bad enough, the doctor added, And no sex for the rest of your lifeâ€¦ unless you want your life to become very short. Forty-four-year-old Evgeniy adored his wife, a ballerina who was significantly younger than him. Their son was still littleâ€¦ Evgeniy’s life was exciting and exuberant, but now, he had no choice but to forsake it. The only option given by his cardiologist was bypass surgery; however, its risk was rather high. At the mere thought of this operation, Evgeniy’s blood ran cold; contemplating his life after the surgery (if successful) made him wish to expire now. Can Dr. Buteyko create an exit from this labyrinth of despair? For Evgeniy and his wife, it was their only hope.

It seems implausible, and yet it is factual: two weeks after his arrival at Dr. Buteyko’s clinic in Siberia, Evgeniy was feeling like a regular man. He lost weight, his swelling disappeared, he tapered off his medicine, and he was able to walk and even carry his camera. He decided to stay with Dr. Buteyko for another two weeks to learn more and also to make a film about his savior. He titled it The Single Winner. (I sometimes show Evgeniy’s film to my students.)

After his return to his hometown, cardiologists examined Evgeniy and deemed his surgery unnecessary. Four months later, he was working full-time on the most arduous assignment of his entire career – filming athletes biking from Russia’s Far East to its West. Later, Evgeniy and his family moved to New York City, where he continued working as a cameraman. He was also teaching the Buteyko Method to Russian expatriates, mainly his colleagues. In 2009, when Thomas and I learned about the Buteyko Method, I contacted Evgeniy. In our telephone conversation, he shared with me that during all the years he and his wife have been residing in the US, they had never been ill and never had medical insurance. Their health coverage was Buteyko Breathing.

How did Evgeniy’s revival become possible? I was told that it primarily happened due to jogging, a powerful CO2 booster, which Dr. Buteyko frequently prescribed to his patients. After Evgeniy’s Positive Maximum Pause rose above 20 seconds, Dr. Buteyko instructed him to start jogging at dawn. This medicine wasn’t sweet; it was cold and dark during Siberian mornings. Evgeniy felt reluctant to follow his doctor’s order, but Konstantin Pavlovich was unyielding. And as if the jogging was not strenuous enough, Dr. Buteyko wrapped a medical bandage around Evgeniy’s torso, restricting the movements of his belly, chest, and shoulders. Of course, at this stage of training, Evgeniy was breathing solely through his nose; however, hyperventilation was still present. The Buteyko corset aimed to counteract his excessive inhalations while exercising. Wearing this pressure suit, and hardly able to breathe, Evgeniy ran away from his heart problems.

This is not a suggestion but a reference point, I often make a waiver while passing this story to my clients. I have neither the bravery of Dr. Buteyko nor his medical knowledge to approach breathing as radically as he did. My style is gentler. I don’t mind if it takes a person a while to get better as long as he or she keeps improving. This approach helps to avoid a severe healing crisis and a client’s discontent. Nevertheless, similar to my teacher, I often insist on starting jogging whenever a person feels ready.

Most of my clients hate jogging, just as Ludmila did. She shared with me that one day Konstantin took her to a rural area of Moscow and pressed her to start running. She wept, but as the saying goes, Moscow does not believe in tears; Konstantin remained steadfast, and Ludmila ended up jogging, swallowing down her sob. From my experience, people with breathing difficulties had much rather bike, swim, lift weights or do anything but running because it can make them feel as if they are suffocating. That’s why in a conventional world, many people have to use a rescue inhaler before they begin this exercise. Due to its strong impact on respiration, running is the most effective exercise for anyone who wishes to improve breathing, but for the same reason, it is also the most dangerous one for anybody who does not know how to control respiration. To triumph, this exercise requires patience and knowledge.

For one of my clients, jogging was unthinkable attainment. Rebecca had been suffering from epilepsy for almost fifty years since she was a preschooler. The gravity of seizures has always been hanging over her head, averting her from physical activities. She worked at home as a software developer, and her sedentary lifestyle kept lessening her vitality and escalating her seizures to the point that sometimes she had several within one day. When Rebecca took a Breathing Normalization course, physical activities became mandatory. First, she started doing basic movements at home, but after about a year, I advised her to start jogging. It was a huge challenge for Rebecca, not only because of her disease but also because her elderly mother had to be with her. Always facing the possibility of a sudden epileptic attack, Rebecca has never been alone her entire adult life. Running on a treadmill at home was not an option, since a fall during a seizure could cause her injuries.

How do you start jogging in this kind of situation? Fortunately, Rebecca came up with a solution. She located a small stadium nearby and started going there with her mother. While her watcher was resting on a bleacher, Rebecca was moving around the arena, alternating walking with a few seconds of Buteyko jogging. The first day, she ended up crashing on the ground, twitching in convulsions. It happened because she missed the warning signs of her breathing and lost a great deal of CO2. Even though she was walking and jogging very slowly, she had to downshift even more. Eventually, Rebecca was jogging every morning for thirty minutes, which significantly improved her health and greatly reduced the intensity and frequency of her seizures, sometimes eliminating them for months. If Rebecca was able to start jogging, the chances are that you can do it too!

Just keep in mind that jogging is not for everyone. For example, Thomas never gave it a chance; he felt that running was too taxing on his body. Ludmila discarded it as soon as Konstantin stopped insisting. And me? I much rather do prostrations than run. If you are rejecting jogging for whatever reason put this exercise on hold until you are at peace with it. Compelling yourself can be counterproductive, since it can trigger a stress response, increasing your air intake. Dr. Buteyko emphasized that jogging should be pleasurable, though sometimes he relinquished this rule. When you are ready to jog, I suggest starting cautiously, giving yourself plenty of time to master this exercise. Most importantly, follow the instructions of Dr. Buteyko. Below you will see the summary of his guidelines.

The posture while jogging is crucial. People often lean forward, but Dr. Buteyko suggested keeping the back straight. I say to my clients, Make yourself as tall as possible. Imagine that someone is pulling your hair up and stretching your spine. To assume the correct posture, Dr. Novozhilov recommends standing with your back against a wall (without a baseboard), making the back of the head, both shoulders, and the buttocks touch the wall’s surface. When the posture is proper, the belly gets slightly pulled in, reducing the breathing volume. The weight of the body should be allocated to the heels. This position has to be maintained throughout the whole time of jogging. Bend your elbows, and move your fists up almost at the level of the elbows. Gaze your eyes three to six feet forward. All muscles, except those engaged in jogging, should be relaxed.

Needless to say, while jogging, inhale and exhale through your nose only! If at any point you feel that nasal breathing is insufficient and mouth breathing is needed, stop jogging and walk instead. It is fine to combine jogging with walking to make breathing easier. If you cannot breathe through the nose due to congestion, polyps, enlarged adenoids, etc. you should not do this exercise. Instead, work on the restoration of your nasal breathing by doing breathing exercises in a seated position or less demanding forms of physical activities. Don’t attempt to start jogging before your Positive Maximum Pause reaches 20 seconds. During jogging, your Positive Maximum Pause should never move below 5 seconds. Following the proper technique, always measure your PMP before and after this exercise to ensure that jogging increases your CO2 level.

A dose of jogging should not be determined by distance but instead by your sense of well-being, respiration, pulse, and time. Do not set up a goal such as Today, I will jog for two miles. Instead, move for as long as it feels good, your pulse is not off the scale, and you can breathe effortlessly through your nose. After establishing an acceptable time for easy jogging, start making this period slightly longer. Start with 5-7 minutes and gradually build up your abilities to jog for 20-30 minutes or even more. Jogging every day or every other day is recommended. During this exercise, your body should feel warm or perhaps sweating, which is preferable. First, this stage can be achieved by increasing the duration of the exercise, and later, by increasing its intensity. As breathing gets stronger, run faster.