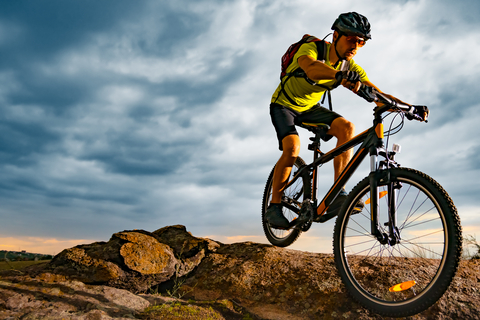 My breathing usedg to be my limitation while biking

Bike riding in the Front Range of Colorado used to be a challenge for me. All riding out here involves climbing and the focus that nose breathing requires was a struggle. Initially, my riding partner was always ahead of me on the climbs. Now, on the particularly steep ones, he is right with me or behind me.

Shortly after I began classes at the Buteyko Breathing Center, I changed my breathing to reduced and nasal. Biking seemed the best way to start. All I had to do was slow down for the climbs, which I had to do anyway having just moved out here from Illinois.

I was very careful about that adjustment: from near sea level to the Denver/Boulder area’s altitude of 5,000 feet. I knew there were plenty of short climbs near our apartment for me to ride. So I began and I felt okay.

I began to ride longer, more sustained climbs because I was eager to completely acclimate. The road from downtown Boulder ascends dramatically to the National Center of Atmospheric Research (NCAR). That became a favorite. Recently I rode to Vail Pass from the small town of Frisco, which took us a total of 90 minutes to the summit. It was a 30-minute return. The solid climb part of the pass, the last 30 minutes, I rode steadily without stopping and constantly breathing through my nose. I felt great at the top.

This Is What Nose Breathing Does. You Just Feel Great At The Finish.

This is what nose breathing (Breathing Normalization) does. You just feel great at the finish. Are there times where you just have to mouth breathe? I am sure there is a sprint situation where you simply have to. Then resume your normal nose breathing when you can. Is there a downside? You go a little slower on the uphill. At first. My goal is to make climbing on the bike while breathing through my nose feel like a massage. My mountain biking experiences have been the same. Steady uphill climbs with total fun downhill.

Applying Buteyko Breathing Normalization to the various exercise systems I have learned took a little longer. I wasn’t sure how to deal with the repetitions. Whether it was bodyweight exercises (Pilates, push-ups, pull-ups stretching, yoga), light free weights, or isometrics, I had to get my head around how to do it. I finally settled on a specific number of repetitions during a breath-hold. It worked just fine. Now that number is increasing especially with push-ups as I do them nearly every day. Isometrics are ideal for Buteyko breathing normalization, as breathing during the contraction is so specific and critical.

My latest challenge is learning the Olympic Lifts: the clean and jerk. Now THAT work is hard. The trainer-led sessions include throwing a 12-pound ball against a wall, swinging kettlebells and all sorts of different core work, plus the lifts themselves. I am breathing very hard after a sequence of lifts and with the trainer right there urging me on, it is a bit tough to maintain the nasal breathing. When I practice them on my own, I use less weight and take longer breaks between lifts. I chose the Olympic lifts to learn as the lifting technique is so specific.