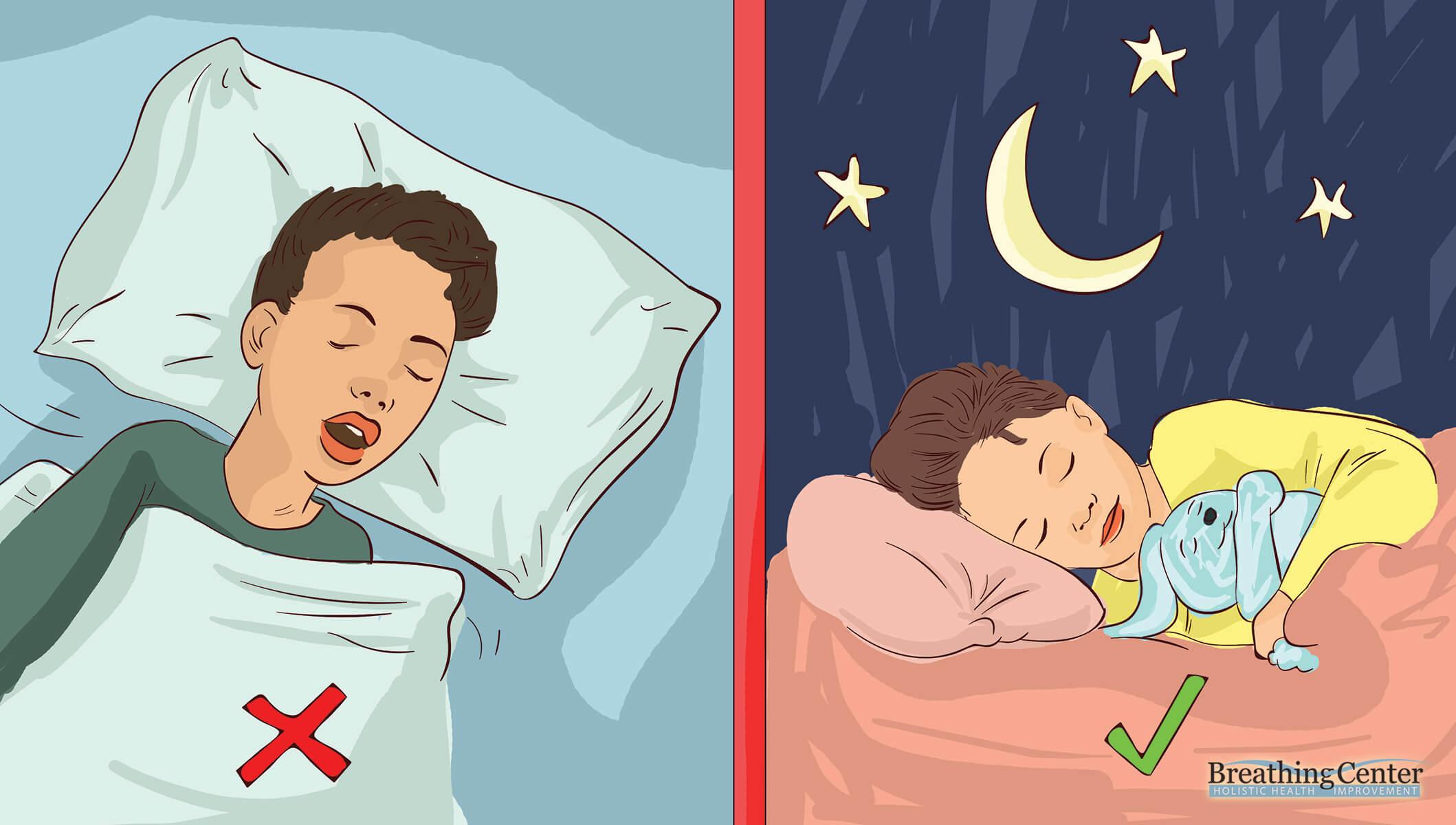 Many children with asthma, enlarged adenoids and other breathing problems sleep with their mouths open. Their respiration is loud and often accompanied by wheezing. They snore and often stop breathing for a while, eventually developing sleep apnea. They often wake up with a stuffy nose or throat and often start coughing right away. All these conditions are caused by over-breathing and can be stopped by light nasal breathing.

Establishing continuous nasal breathing at night is often achieved by using a gentle paper tape, which is available in most pharmacies. A small piece of this medical tape is placed on a child’s lips, vertically, sealing the mouth. The tape acts as a reminder to keep the mouth closed, and encourages breathing through the nose. Although children often remove the tape in their sleep without realizing it, it provides at least a few hours of support for healthy breathing. Sleeping with the tape on through the whole night normally indicates that a child is capable of breathing exclusively through his nose through the night.

The idea of covering their mouth during sleep can be scary for some children. A good approach to this is to get the child used to wearing tape during the day and, as with so many elements of Breathing Normalization, to make it a family activity. The aptly-called Tape Games, described in the Breathing Exercises part of the section of this book, are helpful aids. Once the child gets used to playing with tape during the day and feels comfortable having it on his lips, you can then experiment with using tape at bedtime.

I recommend that parents also use tape during sleep. This will not only benefit your own breathing, but will also help the child to see it as part of the family’s daily health routine, like brushing teeth.

Anyone who uses tape during sleep long enough to become accustomed to it can attest to its benefits. Snoring and dry mouth become things of the past and sleep becomes more restful and rejuvenating. Children with asthma often stop wheezing and coughing at night just because the tape prevents mouth-breathing and greatly reduces hyperventilation. Children generally wake up in a better mood and with more energy.

Scarf:
Another tool generally introduced after the child is comfortable with tape is a lightweight scarf, preferably made of a natural fabric. Its purpose is to reduce air consumption during sleep. This is a useful tool for many children who over-breathe, but especially for those who have sleep apnea on top of asthma.

Wrap the scarf twice around the child’s torso, just at the bottom edge of the rib cage, tight enough to keep the breathing in check, but without causing discomfort. Tie it with a knot in the back, so that if you see it come loose during the night, it’s easy to re-tie without waking the child. Also, the knot in the back will prevent them from sleeping on their back, which can promote hyperventilation.

The scarf needs to be introduced gradually, first during waking hours, with the participation of the parents and the rest of the family whenever possible.
An asthmatic child could have a very negative reaction to the scarf because it might remind him of suffocation. If this is the case, never force a child to use the scarf. Breathing can be improved without this tool.

Other factors:
Many children with breathing difficulties like to sleep face down – lying on their stomach and often hiding their face in a pillow. This position sometimes frightens parents because of a presumed risk of suffocation. In reality, sleeping on his stomach is the best position for a child’s breathing. Breathing is naturally minimized by the child’s own weight pressing on the diaphragm, and this helps keep hyperventilation in check. Many children intuitively like this position. If a child is not comfortable sleeping on his stomach, the next best position for breathing is lying on the side with knees comfortably flexed.

The position to avoid is lying on the back, since this position promotes excessive breathing. In this position, the mouth often falls open, making nasal breathing impossible. Also, a firm mattress and a firm, tall pillow are conducive to healthy breathing. Eating a large, heavy meal before going to bed is not recommended. Excessive food, especially eaten late, provokes hyperventilation.