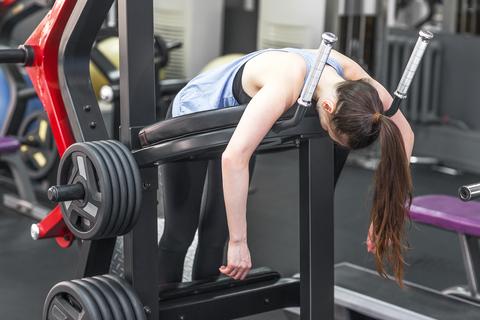 Every living cell in the human body has a job: to produce CO2, which gets generated as a result of complex biochemical reactions called metabolism. When a person is physically active, metabolism becomes more dynamic, increasing its CO2 production. Since hemoglobin releases oxygen to the organs in accordance with a level of carbon dioxide in the blood (the Bohr Effect), the increased CO2 production boosts oxygenation of the entire body. This is why the workouts make us feel energetic; they dispel the mental fog, uplift our spirits, and improve our health.

These are the benefits to our body that workouts are supposed to provide; however, often, they don’t work this way. Excessive breathing while exercising can make a person lose more CO2 than his/her cells are generating. In this case, a workout will make you feel drained; it can trigger coughing, wheezing, breathlessness, headaches, chest pain, and other health issues; it will lessen your oxygenation and become detrimental to your health.

In the pre-comfort era, physical activity was a part of people’s day-to-day survival. Chopping wood and carrying water was not a choice – do it or die from cold and thirst. Women’s workouts consisted of foraging, gardening, lifting children, sweeping floors, and washing clothes in streams. Fishing, hunting, and building were the main elements of men’s physical training. Staying in slow motion for many hours each day generated a steady production of CO2, which allowed people to maintain a sufficient level of carbon dioxide.

Comfort changed it all: it divorced physical activity and married over-breathing. After waking up in a comfortable bed, a contemporary man moves to a comfortable car seat, then to a comfortable office chair, then back to the car, to a comfortable couch at home, and back to his comfortable bed. This vicious circle creates a low metabolic activity resulting in insufficient CO2 production. Furthermore, many modern people breathe excessively and lose a great deal of CO2. Consequently, they become oxygen, energy, and health poor.

Everybody knows that the sedentary lifestyle is not conducive to our well-being. To compensate for this drawback, after work, a person rushes to a gym and spends an hour doing Zumba, steps, power yoga, swimming, or biking. Her workout has to be intense since this is her only chance to be physically active. After her time in the gym, she needs to help her son with his homework, fix dinner, pay bills, and prepare for the next day. Fast, forceful movements fused with a stress trigger heavy mouth breathing. This situation becomes even more venomous when she follows the advice of her fitness instructor demanding Breathe More! Breathe Deeper! Push your breathing. Her workout is supposed to be a solution to her problem but becomes a detriment, weakening her CO2 stock further and laying the groundwork for various health disorders.

What is the key to this deadlock? According to Dr. Buteyko, the most natural solution is to stay in motion for four or more hours every day. Of course, for most of us, this quick fix is feasible only on vacation or retirement; however, there is a way to compensate for the sedentary lifestyle without deserting your work or family. Dr. Buteyko stated that anyone who was unable to spend four hours daily being physically active should counterbalance their low CO2 production by combining movements with reduced breathing. Why? Because a thirty-minute workout merged with Buteyko breathing can generate as much carbon dioxide as several hours of physical activities without it. This technique effectually raises CO2, helping those who are unwell to become physically active again, and making fitness for those who are well more advantageous. To become healthier, we don’t need to change our workouts; we need to change how we breathe during them.

In 2004, when I was forty years old, I started doing prostrations, an intense yogic exercise within a school of Tibetan Buddhism. Every morning, I forced myself to do several hundred of these repeated bow-like movements. My spiritual teacher suggested that I do 111,000 of them to achieve – following the ancient tradition – the first stage of accomplishment. Panting, puffing, and gulping for air, I was pushing myself to bend down, prostrate on the ground, jump up, and throw my body to the ground again. Up and down, up and down. Hard? Yes! So what? I had a goal to achieve!

After a few weeks of doing this exercise, my muscles were stronger, my posture was better, and my eyes were brighter. Even though I did not do this spiritual practice strictly for fitness purposes, I was pleased. During this same time, I began experiencing a dull pain in my joints and kidneys, which gradually became prevalent and then turned into my constant companion. Massage, supplements, and whatever else I tried did not free my body from this chronic discomfort, which I continued experiencing for the next four years.

Since this pain was present regardless of whether I was doing prostrations or not, it had never occurred to me that it was an aftermath of my physical activities – precisely, my respiration during them. Who would deem a connection between breaths, joints, and kidneys! I became aware of it only in 2009 while visiting Clinica Buteyko in Moscow. When I returned home to Woodstock, NY, I started doing prostrations again but decided to modify my respiration. First, I needed to eradicate mouth breathing, which meant to slow it down. Pausing in between each prostration was annoying; my muscles and bones did not need it, but my lungs necessitated a cool-down time in order to continue nasal breathing. Of course, I was not able to do the same number of prostrations within the same time frame. So, what? This second time around my goal was to restore my health.

Soon I became able to breathe solely through my nose, but then, I noticed that my inhales and exhales were accompanied by a sound of a hissing snake ready to attack its victim. Over-Breathing, the monster so familiar to me, did not leave my body; it just hid its head. The sound indicated that I was still forcing too much air into my throat, now engulfing it through my nose instead of my mouth. By using self-awareness and control, it wasn’t that hard to silent the serpent – I just needed to concentrate on breathing quietly.

Nevertheless, it wasn’t the finale of obedience training for my respiration. I observed that within ten minutes of doing prostrations, my nose would start running – apparently, the moribund monster was still messing with my health. It was hard to believe: I was breathing nasally and inaudibly and yet hyperventilation was still present. Thank my loyal ally, my watchful Nose; it was fulfilling its duty by generating mucus, working hard to narrow my airways to reduce my air intake. To ring the serpent, I decided to put a belt around my torso. Dr. Buteyko often used this technique to reduce his patients’ or his own air consumption during physical activities. With the leather belt covering the area on my diaphragm, it became more difficult to breathe, and I had to slow down even more. To my astonishment, in about five minutes of exercising with the belt, my nose would stop running, declaring full victory over the monster.

Overall, it took me about a month to establish a hyperventilation-free state during my workouts, which significantly increased my CO2. During this time, it was inspiring to witness the pain in my kidneys and joints subsiding, eventually leaving me for good. I also noticed that my body started requiring less sleep at night and fewer breaks during the day; I became more energetic, less anxious, and in a better mood.

More than ten years have passed since then, during which I have not experienced this dull pain. I believe it is sensible to state that I was cured. The same physical exercises which had impaired me turned into my panacea as soon as I changed my breathing. My story became a perfect illustration of Dr. Buteyko’s remark about respiration. Breath is powerful, he stated. When used incorrectly, it destroys health, but if used correctly, it can restore health fast.

I still do prostrations. I am able to do them fast, quietly breathing through my nose, and I don’t use a belt anymore. My body accepted a state of normal breathing, which in our strange, unnatural world is often called reduced.