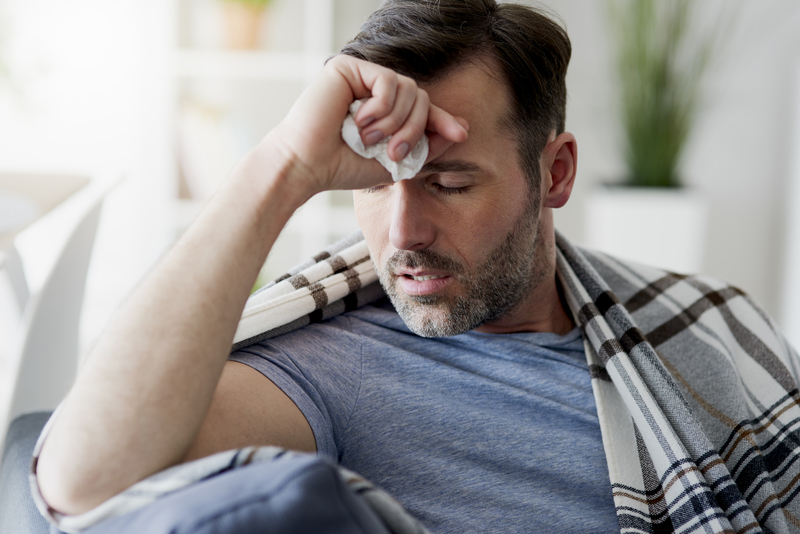 Some people say: Buteyko worked for me but only for a while. My disease came back and became as bad as it ever was, if not worse! It is easy to mistake a healing crisis for symptoms of disease – which often makes people terminate their breathing practice.

Within this method, healing often comes with a ‘healing crisis’ or, as it is also called, a ‘cleansing reaction’. This is not a unique feature – most natural healing techniques have a similar element. The difference is that breathing is powerful and, therefore, the Buteyko healing crisis could be scary. It is important to recognize the symptoms of this event in order to differentiate them from a disease or even ordinary flu.

When Konstantin Buteyko worked in his Siberian laboratory, many of his patients experienced a major healing crisis accompanied by strong symptoms. That was happening because his students were determined to go through difficulties to reach their optimum health. They worked on their breathing intensely, had strong cleansing reactions and soon were symptom free. They were fearlessly following their teacher.

Today’s situation is different. Most people are more fragile compared to those Siberian folks, and many already have freedom from their symptoms provided by strong medication. As a result, people’s motivation often is not strong. In considering of this, doctors at Clinica Buteyko in Moscow deliberately slow their patients’ progress to prevent strong cleansing reactions, which might scare them away.  Recovery takes longer but goes smoother. Following the recommendations of Clinica Buteyko, Breathing Center also practices this gentle approach.

Very few of our students – only the best ones – experience a healing crisis. The symptoms are normally similar to mild flu: headaches, body soreness, weakness, fever, increased urination, and, sometimes, diarrhea.  This cleansing reaction usually lasts between two days and two weeks and could happen a few times.

Breathing normalization invariably leads to better function of the metabolism, which becomes more active and starts eliminating toxins collected in the body. Often, a healing crisis takes place when PMP reaches 10, 20, 40 or 60 seconds. It appears as the body requires some time in between each progression to accumulate energy in order to erupt toxins brought in by medication, non-organic food, polluted air, etc. People, who are severely ill and have been taking medication for a long time should expect a stronger healing crisis.

The healing crisis often temporally intensifies primary symptoms, in Thomas’s case it was manifestations of asthma. After practicing Dr. Buteyko’s approach for a while, his coughing fits suddenly became stronger, draining a great deal of his energy. This was scary, even though it was obvious that his lungs turned themselves on to a self-cleansing mode. They would produce an enormous amount of mucus (sometimes about a glass per day), which was rather colorful â€“ yellow, green, brown, and even black. Dark colors often indicate that a person smokes, which Thomas used to do when he was younger. Now, his body was using mucus as a vehicle to transport pollutants up and out of his lungs. At a certain point, his coughing intensified as if he was about to vomit and then his lungs began extracting solidified matter. It was a collection of dark stone-like objects, which I would never have imagined nestling in anyone’s lungs. Most likely, they were built out of old hardened mucus mixed with various toxins, which had been blocking Thomas’ airways for years. When he coughed them out, his breathing eased.

Russian doctors trained by Dr. Buteyko stated that during cleansing reactions people often experience their symptoms in reverse order compared to how they appeared in their lives. They said it’s like watching a movie in reverse. My healing crisis was not as pronounced as Thomas’ but it appeared in a series as described by those doctors. From time to time, an ex-symptom, which I thought had disappeared, would knock on my door and say May I come in? I would chase it away by breathing less and only then would it leave me alone for good. At some point, in the end of my first Buteyko year, I experienced strong headaches, which surprised me since my headaches became mild after I lessened my air consumption. This time the pain was intenseâ€¦ Then, I remembered that I experienced migraines during my final year in high school. In fact, that was when they started; these headaches had been continuing throughout my whole life though they had never been as strong as during my senior year. I did not think much about them, assuming that having a headache a couple of times a month is normal. This time, my unexpected guest made me reconsider this belief and realize that having pain in my head was abnormal. After a few days, this healing crisis was over and I have not had headaches after.

I hope that my stories help you understand that it is imperative to identify a cleansing reaction before it becomes active. Let me explain how to do it:
If within a short period of time (let’s say, one to three weeks), your PMP (or CP) becomes two or more times higher, a healing crisis might take place. In this case, your PMP will drop down to its previous level and you will experience some symptoms. Don’t worry: when the cleansing reaction is over, the symptoms will be gone and your PMP will stabilize at a higher level.

A healing crisis could be complicated and it is therefore important to work under the supervision of a certified Buteyko Breathing specialist and preferably a doctor. Full recovery is a complex matter. That is one of the many reasons Konstantin and Ludmila Buteyko insisted on serious and continued education for all Buteyko practitioners. Ludmila and Andrey don’t support teachers presenting this method as a simple do-it-yourself technique, which anyone can learn within a day or two. The main individual/family course at Breathing Center consists of two months of daily contact with a Buteyko Breathing Method specialist and continuing support after. This is the only way to ensure a path to full recovery.