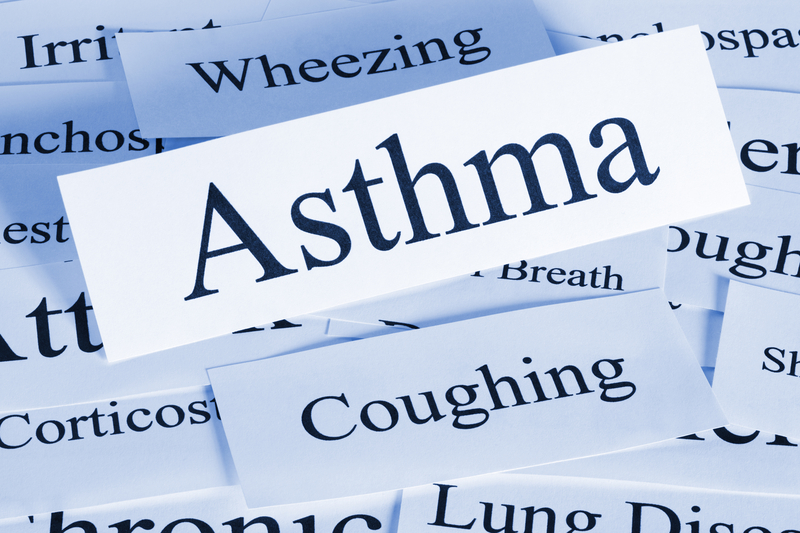 In 2007, my husband, Thomas, began having severe asthma attacks.

He had had asthma for almost twenty years. When he was young,

Thomas had Legionnaire’s disease, which seriously damaged his lungs. After that, doctors told him that he would remain asthmatic for the rest of his life.

His asthma didn’t bother him much and didn’t stop him from being active and energetic. He swam and surfed, lifted weights; and had a Black Belt in Karate. Once in a while, his breathing would be strained. If it was particularly bad, he’d use his rescue inhaler, which would quickly clear everything up. It didn’t seem like a big deal.

However, in 2007, Thomas and I caught bad flu and became very sick. In a couple of months, I recovered but my husband didn’t. The flu triggered his asthma, making his symptoms severe. Time was going by and he was only getting worse. Here’s how he described his experience:

For many months, night after night, I had a recurring nightmare: I am standing by the door to my house as if I am going somewhere or waiting for someone. My heart is racing out of control. I am gasping for breath. My lungs feel as if I am suffocating, but I cannot exhale. My mind is in total panic.

Then, I would wake up in my bed, gasping for air and feeling an immense amount of fear. The fear would hit me because this nightmare was my reality. The worst part was that there was nothing I could do about it. The coughing fits and suffocation made my life a living hell. Most nights, I coughed for hours at a time, praying for it to stop, and feeling more frightened than I have ever felt before. Eventually, it would stop, and for a reason that still doesn’t make sense to me, I would feel safe. I must have thought it would never happen again, though that thought was not at all rational because the coughing would come back the next time I tried to sleep, go out into the cold, get too close to our dog, or tried to do any physical work or exercise. Almost anything could trigger the attack, even stress, which, at that point, I was feeling constantly.

Thomas and I did everything we could to stop this nightmare.

We saw several doctors. In the beginning, when Thomas’ asthma was getting progressively worse, his physician advised him to take a course of antibiotics. Thomas took them believing that drugs would kill the infection in his lungs. Unfortunately, it did not stop his symptoms. When he saw the doctor again, he insisted that Thomas take another, stronger course of antibiotics. The second course seriously affected Thomas’s breathing: his suffocation attacks became more forceful and more frequent.

Next, doctors suggested a stronger rescue inhaler along with steroid-based asthma medication.  Thomas agreed to it all expecting that the drugs would help. What followed next was a prescription for the stomach problems caused by the steroids. And then, the dosages of all medication were increased. This did not help; in fact, it only made the situation worse. The medication was able to suppress some of his asthma symptoms and temporarily relieve Thomas and yet these drugs had terrible side effects and their accumulative effect caused my husband’s health to deteriorate further.

Thomas was becoming an invalid right before my eyes

He developed strong allergies to many types of food, as well as dust, humidity, pets, smoke, you name it! It was difficult for him to walk a hundred feet without losing his breath, and impossible in cold winter air. He felt exhausted all the time, had to take frequent naps, and became weak to the point where he could no longer work. We kept looking for conventional and natural treatments for asthma but nothing seemed to work.

His health was greatly impacting both of our lives. How could you possibly be happy when a person you love could die from suffocation at any moment? During this time, the only thing on my mind was to find a way, preferably, a natural way to treat my husband’s asthma. I remember that one day I went for a walk and met an acquaintance. John casually asked me how I was doing. I am okay, I answered, but my husband is struggling with his asthma. He coughs all the timeâ€¦ Fifteen minutes later, to my embarrassment, I found myself still anxiously talking about Thomas’ disease. Oh, poor John!¦

Thomas and I have been involved in the healing arts and spirituality all our lives. Of course, we used the knowledge we had accumulated over years in Thomas’ asthma treatment, and followed suggestions from alternative health professionals. Thomas was taking many vitamins, supplements, Chinese herbs, Tibetan precious pills, eating a variety of medicinal mushrooms, and applying breathing techniques for asthma he learned from the Internet. We tried Russian folk remedies for asthma. He had sessions of aromatherapy, reiki, acupuncture, colonic, and other holistic techniques for asthma. We also investigated the possible psychological causes of his disease in an attempt to bring healing from within. And we prayed constantly.

All of it helped but only to a certain degree. It seemed as if none of these remedies for breathing were able to create a turning point for his situation. Thomas still was dysfunctional in life and his health was not improving.

At one point, we had heard about an asthma clinic by the Dead Sea, in Israel.  We were told the dry climate and constant sun, combined with being in one of the lowest elevations on the planet, was supposed to be remedial for asthmatics. And, the added combination of sea minerals, mud baths, and special massages they were offering supposedly amounted to miraculous healing power. This is a natural cure for asthma, we were told.

We were ready to try anything – any asthma treatment that works, any asthma breathing techniques, any breathing methods for asthma –  and so, flew to Israel and spent one month at the spa. Thomas swam, drank plenty of fresh juice, and was given endless massages. Despite his continuing asthma attacks, it made him feel better and stopped an ongoing infection in his lungs. His coughing fits decreased. This natural cure for asthma does work, we thought!

Upon our return to our snowy home in Woodstock, New York, we noticed the cold air didn’t bother Thomas as much as it had before, and his energy level became higher. On Christmas Eve, we sat by the fire with our daughter and her boyfriend happily discussing his improvement. All of us were hopeful that Thomas’ breathing and health would continue improving. Unfortunately, the very next day Thomas caught a cold and all of his asthma symptoms returned. Soon after, they became just as bad as they had been before our expensive trip.

It felt as we had reached a dead end. Doctors continuously told us that asthma was incurable, suggesting that we finally accept the situation. There are no natural methods for asthma that could cure him – they were confident about it. They were convinced that Thomas had to be on strong medication for the rest of his life.

Well, it seemed to me that the end of his life was approaching quickly. It was difficult to accept this situation, and despite all odds, we kept searching for a natural cure for asthma.