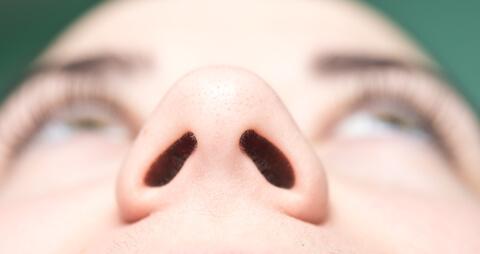 Your nose is your Buteyko guru

The nose is our ally, which always tries to lessen over-breathing, which could cause many health issues and even be lethal. When you hyperventilate, your nose produces mucus to narrow airways and make you breathe less. If you reduce your air consumption voluntarily, you remove the reasons for your nose to create blockages and ‘easy breathing’ will be restored. It’s amazing for me to observe how reactive my nose became after several years of breathing practice. Every time I eat or drink something favorable to hyperventilation (coffee, for example), my nose immediately starts running. If I visit a high-altitude place forcing me to breathe deeper, my nose will run until I readjust my breathing. If I talk loudly for a long time, for instance, giving a lecture to a large audience, it deepens my breathing and my nose starts compensating for it.

I am sincerely grateful to my nose, which I call ‘my Buteyko Guru.’ I’d like to share with you how this name came into existence. Our student, Marsha, who had previously participated in our workshop, decided to do a Buteyko Breathing Method retreat. Marsha has been practicing for a while, though not persistently and her results were rather modest. Nevertheless, she was proud of her achievements since she had been a mouth breather and asthmatic since she could remember, and she wanted to demonstrate her nasal breathing to Thomas and myself. She was enthusiastically looking forward to her one week in Woodstock, where she was planning on doing breathing exercises intensely, going to the gym with Thomas for her Breathing in Motion course and having consultations with me. However, just before she arrived, she caught a cold and by the time we saw her, Marsha was heavily breathing through her mouth because her nose was blocked. She tried various medications but nothing helped. Her program with Thomas, as well as most breathing exercises, was canceled. When I met Marsha for a consultation, she was extremely disappointed.

I suggested for her to sit down, relax, close her mouth and breathe through her nose – as much as it would allow her. “Trust your nose”, I told her “It knows exactly how much air you need at every moment. Take only as much air as your nose is offering you”.

Marsha tried and almost immediately got angry. She jumped up almost screaming, “I told you that my nose is blocked. The only way I can breathe is through my mouth!”

We did relaxation exercises and then I asked her to breathe through her nose again. It took her a while to settle but eventually, she relaxed into nasal breathing. Within a half-hour, her hyperventilation significantly lessened and her nasal airways widened. Consequently, Marsha’s breathing eased significantly.

For the first time in her life, Marsha began feeling a sense of gratitude to her nose. For many years it worked hard to improve her health, preventing threatening diseases and yet its work remained unnoticed and unappreciated. To correct this situation, I asked Marsha to write a letter addressed to her nose. A day later, when she read this letter to me, she started crying. She hated her nose for so long! It was often stuffy and to open it up she would have to take a strong medication, which would make her irritable. Then one day, polyps started growing in her nose, which, by the way, is another mechanism for narrowing airways and lessening hyperventilation. Marsha kept hyperventilating, which resulted in one of her polyps growing longer to the point that it became visible to others. Eventually, her polyps were surgically removed and yet a few months later, new ones sprouted in her nose. Obviously, Marsha’s nose was not willing to give up on her. Her trouble greatly diminished after she took the Buteyko Breathing Method workshop; however, the role of her nose as a lifesaver was never acknowledged. “Thank you, my nose – my Buteyko Guru, for everything you’ve done for me!” – Marsha ended her letter, and both of us rolled with laughter.