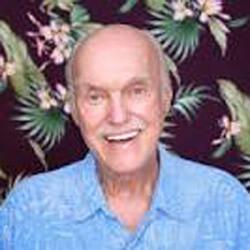 People often think that oxygen plays the primary role in the process of breathing but Dr. Buteyko dispelled this archaic belief. He proved that this role belongs to carbon dioxide, which regulates how much oxygen is delivered to various organs.

Recently I have been working with Ram Dass, a famous spiritual teacher and former psychology professor at Harvard. In 1997 Ram Dass experienced a stroke; in 2011, when we met, he was still suffering from its consequences. His speech and memory were greatly impaired. He had to pause in between each word and often would forget what he wanted to say or would pick up with the wrong word. Besides this, Ram Dass had breathing difficulties, sleep apnea, high blood pressure, and other health issues.

The interesting thing was that he lives on the island of Maui, Hawaii close to the Pacific Ocean, surrounded by endless waves of oxygen. In addition to being in a healthy environment, he has been practicing meditation, Pranayama, and staying on a very healthy diet. He had a whole group of medical doctors and alternative practitioners working on his health and yet they were not able to improve it.

The co-founder of Omega Institute for Holistic Studies, Stephan Rechtschaffen, MD, suggested to Ram Dass to start working with a specialist in our Breathing Center. Stephan believed that it would help since his son who had been asthmatic was able to overcome his condition by following one of our programs. Ram Dass yielded to Stephan’s persuasion and that’s how my weekly online sessions with him began.

When I saw this elderly noble man I experienced strong compassion – it was obvious that he was greatly suffering from oxygen starvation. His mouth was open almost all the time and his breathing was noticeable heavy. In the beginning, I repeated almost incessantly, ‘Ram Dass, please close your mouth.’ Fortunately, as a person of high awareness and good discipline, he started doing his breathing exercises regularly and soon was able to lighten his breathing. Within three months his situation changed. He was able to sleep without his sleep apnea machine, his blood pressure became close to normal, and his anxiety regarding his breathing was completely gone. Perhaps, even more important for him, was the fact that his speech became much more fluent and his memory improved considerably. All of this just because he reduced his over-breathing and consequently increased the amount of carbon dioxide in his lungs (his vital energy!) – therefore all his organs, including his brain, started receiving more oxygen.