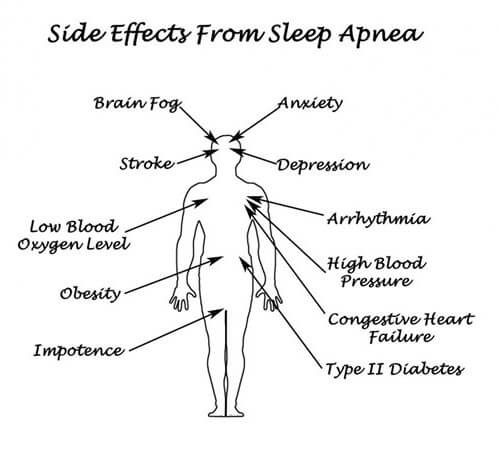 Disturbed sleep is directly related to disturbances in breathing. You don’t normally snore when you’re breathing gently and slowly through the nose. The faster the air moves through your airways, the more turbulent the airflow, and the vibrations of your respiratory structures result in a snoring noise. In some cases, this sound may be soft, but in other cases, it can be unpleasant and loud.

Common side effects of sleep apnea

Sleep apnea and snoring are symptoms of dysfunctional breathing patterns. Sleep apnea affects between 2 and 10% of the global population. Many people think that abnormal throat structures or excessive weight causes sleep apnea, but Dr. Buteyko believed that the main cause of sleep apnea is excessive breathing, especially mouth breathing, resulting in a low level of CO2 in the lungs. He suggested that in OSA (Obstructive Sleep Apnea), airway obstruction is a compensatory mechanism for hyperventilation (over-breathing).

According to him, hypopnea (breathing reduction) and apnea (breathing cessation) experienced by people with sleep apnea, occurs as a defence mechanism to help us maintain carbon dioxide levels in the lungs and blood. Over-breathing, particularly at night, leads to abnormally decreased levels of carbon dioxide in the lungs and consequently (for most people) in the blood. So in order to avoid this, the human body starts to halt breathing, in an effort to increase the carbon dioxide levels and maintain homeostasis.

Many people who have trouble sleeping at night actively breathe through their mouths. By learning and applying the Buteyko Breathing Technique, they can correct their habitual patterns of breathing and switch to gentle nasal breathing during day and night. This results in an acceptable level of carbon dioxide in the lungs, which means that the body no longer needs a defense mechanism by creating sleep apnea. As a result, sleep apnea episodes get reduced and eventually stop.

In short, Buteyko Breathing offers people the method for practicing gentle and reduced-volume respiration, which helps establish wholesome and harmonious breathing patterns and stop over-breathing. To achieve this goal, various techniques are used such as gentle breath-holding, humming, and many other ways to generate and save carbon dioxide, which contrary to the common belief, is not a waste gas, but, according to Dr. Buteyko, the main regulator of all bodily functions.

By breathing correctly, people can enjoy health benefits such as improved sleep, reduced stress, and an overall improvement in their quality of life. Gentle, deep, even, and moderate breaths not only soothe the nervous system but also increase the overall oxygenation of the entire body.

The best way to learn and apply the Buteyko Breathing Method is by working individually with a Buteyko Practitioner certified by the Buteyko Clinic in Moscow or its official representation â€“ the Breathing Center, the international online school for people who would like to learn the Method from a reliable source. If you wish to learn more about the Buteyko Method, you might want to start by watching the YouTube videos created by Sasha Yakovleva, the founder of the Breathing Center, where she explains how the method works and demonstrates various breathing exercises.