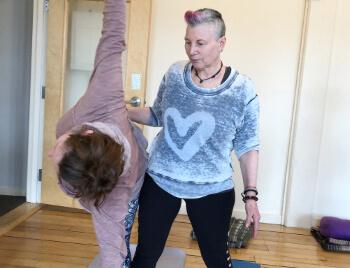 I always had about six inhalers, one near my bed, one in the car, one in my pocketbook, an extra in my closet, and one in my gym bag. It’s not that I needed them all the time, but if I felt my breathing was tight, or I was exposed to any trigger, I wanted to be prepared, to ward off a potential asthma attack. And I was tired of it. Getting a cold quickly turned into bronchitis, which meant weeks on steroids and tripling of my rescue inhaler. Many times I wasn’t even sure if I would have an attack, but the whole point was I needed them close by just in case.

In the meantime, I was developing an active meditation practice and was taking my yoga teacher training. I was learning how to work with my breath and was following the standard theory that deep yoga breathing, or trying to take long deep inhales, expanding the chest and slow exhales would not only help my asthma, but it would set the stage for deeper relaxation. I was trying to take long deep breaths to relax.

But somehow my asthma got worse.

So, I went to the Internet and typed in pranayama and asthma, hoping to find which pranayama techniques would help my asthma. But what I found instead was that most pranayamas were not only harmful to asthmatics but might not be beneficial for modern-day yoga practitioners. As I continued my extensive research, I discovered the Buteyko Breathing Center’s website and the Buteyko Breathing Method. And what a shock! Everything that I was doing to improve my breathing was actually making it significantly worse.

I downloaded Sasha’s book Breathe To Heal: Break Free From Asthma and quickly got educated. Then I tried a few of their suggestions, started Buteyko breathing exercises, and immediately stopped doing all the things they said were damaging to my breathing and health. My interest was piqued, and I scheduled a series of private sessions online with Sasha Yakovleva, the Co-founder of the Buteyko Breathing Center.

In less than two weeks I felt immensely better and went completely off my medicine. I felt like I was reclaiming my health. But I had to give up some pretty ingrained preconceived theories about breathing. Actually, I had to completely relearn everything about breathing because much of what is taught is just wrong for people today, meaning the way that people live their lives today versus when these ancient practices were developed. I also had to make some pretty significant lifestyle changes.