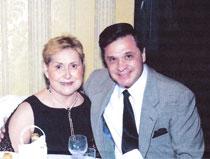 I have been suffering from Parkinson’s Disease for the past 25 years. The medications that I take are very powerful, resulting in adverse side effects, i.e. drowsiness, dry mouth and anxiety. In addition to Parkinson’s Disease, I also suffer from hypertension and a thyroid condition.

After enrolling in the Breathing Normalization course based on the Buteyko Breathing Method, I followed the instructions to the letter and I am happy to say that the lump in my throat (thyroid) has gotten smaller. My anxiety has gone down and my Parkinson symptoms have subsided, somewhat. Another benefit is my ability to sleep more soundly without the horrible nightmares that plagued me before. In fact, with my medical doctor’s approval, I am reducing one of my medications as my tremors are subsiding. All of these results were achieved after applying the Method just for a few weeks!

I sincerely believe that the Buteyko Breathing Method will give me an opportunity to live a healthy life free of medications. I am very grateful to Buteyko Breathing Center for sharing the “Buteyko” gift with me. It has already helped me tremendously!