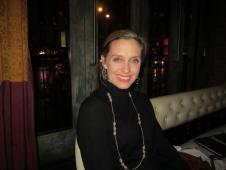 When I met Jesse, my Buteyko instructor, a few months ago before I started my classes I was a mess!

My asthma was always classified as mild to moderate by my doctors, though it was becoming persistent and the steroids and inhalers where giving me panic attacks and severe acid reflux. I even went to the urgent care clinic several times because I thought I was dying. I also developed a cough from the medicines that would not go away! The side effects where something I was not willing to live with , that’s when I started looking for other methods and saw the article in the NYC times online about Buteyko. I was definitely skeptical and thought it would not work.

I called the canter and talked to Ann and was convinced after talking with her that this was something I wanted to do.

My sessions with Jesse helped me so much! When I started my CP was 3 and now it’s in the high 20s and even has been in the 30’s on some days. I am so much more relaxed and feel like I can handle my ASTHMA AND Anxiety in a good way! Having this tool is amazing and I am forever grateful to Jesse and the Buteyko Breathing Center.

I do still take my inhalers a few times a week(mostly before exercise) but this is a huge improvement from before where I was, using them every day, several times a day as well as several other medicines for anxiety and reflux. I just started learning and applying Buteyko Bretahing, so, I know soon I won’t even need them anymore.

I am also a very active person: running, yoga and Cross fit. I know by learning Buteyko Breathing Normalization this will only help me with my fitness goals. I am definitely signing up for the Breathing in motion classes with Jesse, so I can become an even better runner by learning to breathe through my nose!