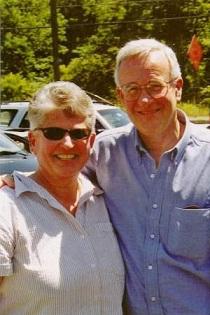 Although I did not initially enroll in the Buteyko Workshop, I drove my wife, Judy, more than 300 miles one way to Woodstock, NY, so that she could participate in it. Judy had had such a terrible time with chronic obstructive asthma following a January surgery. The procedure was a simple surgery on the elbow which went well but the anesthesia was mismanaged. In the aftermath of that I was willing to try in any way to help her find a possible solution to her difficulty.

Perhaps I was a little bit like Abraham of old, called to leave his home and journey with his wife to a faraway place. Unlike Abraham, I traveled symbolically from a position of caution and some skepticism about what I was hearing regarding the Buteyko Breathing Method while observing it from a distance to a kind of promised land or at least a land of new beginnings as I met and began to appreciate Thomas and Sasha who were the presenters at the Buteyko workshop.

Undoubtedly a major signpost enabling me to travel this route from skepticism to openness and later even appreciation is the spirituality inherent in and integral to the program which Thomas and Sasha shared in the workshop and with me personally. In fact the spiritual component they talked about helped to put me back in touch with some spiritual disciplines which I need to refocus on myself.

Most impressively along this journey has been the observation that Judy has been significantly helped in her energy level, her diminishing need for rescue inhalers, her sense of self-confidence and her overall outlook on life.

A serendipitous discovery along the way which has made the connection to Buteyko even more special for me is the fact that Thomas’s first pastor who also baptized him was a senior colleague of mine in Carlisle Presbytery where we served in different churches.

While some mystery still remains about how the Buteyko method works (being more of a theologian than a physiologist), the fact that it does make a positive difference for people is a worthy commendation for consideration by others also seeking help with respiratory issues in particular. And part of what helped me to become comfortable with the Buteyko concept is the very fact that they urge people to maintain contact with their regular doctors and not to throw away their asthma medicine, but to take what they need it.

Furthermore I was particularly impressed with the on-going connections with medical communities in the United States as well as in Russia where it began as well as efforts to connect with research medical institutions in the United States, such as the Institutes of National Health, to further explore and give credibility to the method within the medical community in our own country.