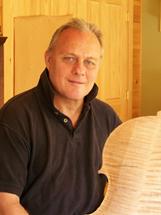 April 2009:
My asthma was diagnosed as serious and poorly controlled, and my quality of life had deteriorated significantly. A not uncommon health condition, in which my eyesight is jeopardized by the use of inhaled steroids, has forced me to go without the most effective known medical treatment for controlling asthma, thus leaving me at serious risk and vulnerable to repeated asthma attacks. There are no currently known successful medical treatment options open to me.

Through an acquaintance, I stumbled onto information about the Buteyko Method. Further research turned up the presence of the Buteyko Breathing Center in Woodstock, New York, the official representative presence in the U.S. of the Buteyko Clinic in Moscow. Instructor Thomas Drakon Fredricksen admitted me into their Buteyko Breathing Normalization training program to get me started on my path to overcoming my asthma and in just 13 days of training, diligent participation and practice, I have already improved well beyond anything I could have imagined.

The Buteyko Method offers a qualitative way of measuring progress which is called the “Control Pause“. This is a measure of one’s ability to breathe successfully in a healthful way according to the practice of the Buteyko Method and is designated by a numerical benchmark. When I arrived at the Buteyko Breathing Center, my number was very low and in less than two weeks, my breathing capacity, as measured by the Control Pause, has increased 5 times over my initial number. As I gradually learn these new techniques, I already notice a distinct improvement in my daily and nightly breathing, as well as a reduced need for my inhaler.

Both Thomas and Sasha are deeply knowledgeable about the Buteyko Method. As an instructor, Thomas is thorough and encouraging, as well as available beyond the Center after hours for support, which is reassuring in bridging the gulf between dependence on inhalers and learning this new method. This training with Thomas is both very instructive and enjoyable. Knowing that Thomas was also a previous sufferer of serious asthma gives his insight credibility which is comforting, and his own personal recovery and success with the Buteyko Method offers great hope to me.

For me, the Buteyko Method is a heaven-sent gift. I will practice the Buteyko Method for the rest of my life and am deeply grateful for the opportunity this method will afford me to go back to living life with renewed energy, now with hope for a long healthy life.

Now at ten weeks, 2 1/2 months, since I started learning the Buteyko Breathing Method, my symptoms of asthma have receded dramatically. I have gone from using my “rescue” inhaler anywhere from 8-20 times in 24 hour period when I first started to now using it about once during the same time period. My overall health has improved significantly and I feel tremendously better.

Friends who have not seen me for some time have remarked that I even look much better than I did before I started with the Buteyko Method. I am still practicing my breathing exercises and implementing the Buteyko Lifestyle principles. I have gone from living in a very deteriorated state of health, always fearing the arrival of the next attack, to now living almost as if I no longer have asthma. I am much more comfortable and relaxed in my daily life and am so grateful for this breathing technique and lifestyle which has given me back my life!

Read about David and his application of the Buteyko Breathing method in The New York Times article.