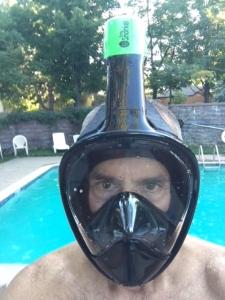 Readers Feedback To The Blog About Swimming

Peter Merlin
I received several emails as a response to my previous blog about swimming. Mostly, people were excited to find out that there were ways to swim and breathe solely through the nose; they liked the mask Dr. John Douillard suggested. Our Buteyko Specialist Peter Merlin purchased one right away and sent me his picture wearing it. This thing is great! I can lap swim again! – He wrote.

I also received a surprising comment regarding Dr. John Douillard’s presentation: I recently watched his video on swimming, – a reader wrote. I was amazed that he was mouth breathing and almost gasping during his entire presentation! Could you please let Dr. John Douillard know this? It really decreases his credibility.

Honestly, this email made me smile; also I felt pleased reading it. Ten years ago, when I started teaching nose breathing while talking, this idea was considered too radical and merely impossible by many. I remember receiving a letter from a well-known Buteyko practitioner from Europe (the Breathing Center did not certify him) demanding to stop teaching this technique because it was too difficult for him to apply it. Now, many subscribers to this Blog think that breathing through the nose while talking is the norm. Even that notorious practitioner breathes through his nose during his Buteyko presentations. What an achievement! I am sure Dr. Douillard will improve as well.