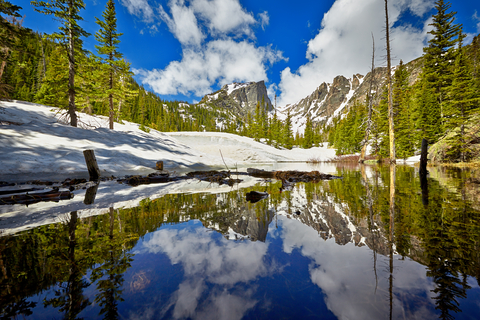 This is a picture of Thomas Fredricksen, Advanced Buteyko Specialist and co-founder of the Buteyko Center. A few days ago he hiked at 12,000 feet elevation in Rocky Mountain National Park. Some mountain slopes were covered by snow fields, which looked deceivingly shallow but in some areas were four to five feet deep. Unexpectedly, his foot slipped into the deep snow and became trapped there. It took him about ten minutes to climb out of the snow and to continue on his four hour hike. No big deal!

But if you or someone you love suffers as Thomas did; you know it is a very big deal! Eight years ago Thomas was a prisoner of his asthma and was hardly able to leave an air-conditioned room with an air-purifier, even at sea level.

Walking outside would trigger his asthma, intensify his constant cough, and make him feel out of breath and as if he was suffocating. The Great Outdoors turned into his greatest enemy threatening him with pollen, dust, humidity, hot air, cold air… you name it! To leave the house without a rescue inhaler felt almost suicidal.

In 2008, Thomas was on many types of medication but they were not improving his situation. In fact, his health kept worsening due to his hyperventilation and the strong side effects of all the medications. His life was quite limited and he felt like an invalid, and yet the Breathing Normalization training changed this hopeless situation almost miraculously by helping him gain control of his breathing, and become medication-free, healthier and stronger.

In this CD, “Buteyko Breathing Exercises & Method“, Thomas teaches the main principles of Dr. Buteyko’s work on how to improve your breathing and health. The CD contains instructions on how to do basic breathing exercises, which can be safely practiced by adults and children. These exercises are simple, enjoyable, relaxing and perfect for the summer! They can be done while gardening, walking the dog, enjoying the beach or mowing the lawn.

“You really owe it to yourself to try this. I have gone from an Invalid to an Athlete. You Can As Well.”
Thomas Fredricksen. Boulder, Colorado. Summer Solstice, 2016