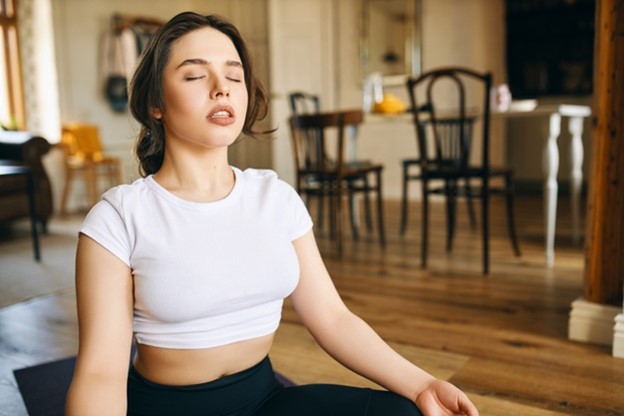 Over the years, deep breathing has become a new fad that’s increasingly gaining traction across the nation but is it healthy?

When people are having a panic attack, they’re told to take deep breaths. The same suggestion is regurgitated when someone is seen in an anxious and troubled state following a traumatic experience. In fact, deep breathing is also suggested during moments of confusion, mild chaos, and uncertainty. It’s becoming the new band-aid for discomfort.

However, upon closer look, the harmful nature of deep, big breathing patterns becomes increasingly evident. As an individual takes long, deep, excessive breaths to relax their mind and body, they unnaturally activate their chest and neck muscles. The natural balance of the body is disrupted, which triggers a host of problems.

In this article, we’ll walk you through the most common dangers of deep breathing. We’ll also discuss why the Buteyko Breathing Method is considered a safe, effective, and healthy alternative to deep, excessive breathing.

Let’s start with the harmful effects of deep, excessive breathing.

1. Impaired Blood Flow to the Brain

By taking a deep breath, people temporarily over-breathe/hyperventilate. As they continue to practice deep mouth breathing multiple times during the day, the effects of this harmful process begin to crystallize.

Deep breathing affects the oxygen and carbon dioxide consistency in the blood. This balance is essential for homeostasis. When the person expels too much carbon dioxide, blood flow to the brain is impaired. If you’re new to deep breathing, you may not notice the effects of this disruption. With continued reliance on over-breathing, you’ll begin to feel lightheaded.

As the carbon dioxide levels in the cells and tissues increase and oxygen levels drop, the individual could potentially suffer from a hypoxia condition characterized by an inadequate oxygen supply in the body. Low levels of oxygen are linked to a drop in energy levels. Not only does the individual feel lightheaded, but they also feel tired, lethargic, dizzy, and fatigued. The drop in oxygen may trigger memory and concentration problems.

As a person takes deep, excessive breaths, their pH changes. With considerably lower levels of carbon dioxide in the blood, the individual’s blood pH unnaturally increases and becomes more basic, or alkaline. This is acute hyperventilation. The pH changes so unexpectedly and rapidly that the body simply cannot adjust to the state of flux. This causes the person to experience shortness of breath and chest tightness.

Rapid, frequent deep breathing changes the pH so drastically that the person may pass out. Owing to the unnatural state of breathing, the body is pathological or diseased. The harmful effects linger until the person corrects the underlying cause of the pH abnormality.

Overreliance on deep, big breathing can trigger a host of health conditions. People who already suffer from certain conditions may notice an exacerbation in the symptoms. In many cases, people turn to deep breathing to help with asthma and other types of breathing problems. Unfortunately, this measure ends up making things worse, instead of ameliorating their condition. By consuming too much air, people inadvertently make their breathing difficulties worse. The person may notice an increase in asthma attacks, excessive mucus, and severe coughing.

4. The Buteyko Method: A Healthy Alternative to Deep Breathing

When people are first told to steer clear of deep breathing, their immediate reaction is confusion and disbelief. They’re unable to process the reality of deep, excessive breathing, especially because it’s largely glamorized by society. And what could possibly be the alternative?

People have gotten so used to deep breathing that they struggle to fathom the possibility of a healthy, safe, and effective alternative. However, there is one.

The Buteyko Method founded by K.P. Buteyko, MD is an alternative holistic approach that helps with breathing problems. The method is completely medication-free. It’s based on the premise that wholesome nose breathing restores the natural balance of the body, which is disrupted by frequent deep breathing, especially via the mouth.

For a better grasp on the basics, start by watching the following video:

If you’re new to the Buteyko Method, we recommend utilizing the following resources:

Click here for a closer look at the specific conditions that can be improved by implementing the Buteyko Method. For more information, feel free to contact our team.