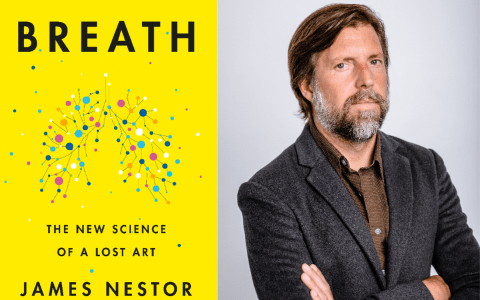 Free divers can hold their breath for ten minutes while diving as deep as 300 feet. Are they superhuman, genetic mutants who were born underwater – or is this a skill any of us can master?

James Nestor’s studied free diving when he researched and wrote his book Deep: Freediving, Renegade Science, and What the Ocean Tells Us About Ourselves (2015). He began to wonder, is breathing more important than we realize?

It wasn’t until years after Deep was published that Nestor decided to explore how, exactly, free divers learned to hold their breath and if their extraordinary skills were connected to health. This led him down a long, sometimes dark rabbit hole and, finally, to the publication of Breath, which has quickly climbed the non-fiction bestseller lists. Nestor spent over a year researching the book, and his diligence shines in both anecdotes and footnotes.

The author states his purpose early on, The book is a scientific adventure into the lost art and science of breathing.

As a science writer who has also published in magazines like Outside and The Atlantic, Nestor balances exhaustive scientific research with personal narrative that helps the reader feel the human impact. In Breath, he’s hit on a topic that couldn’t be timelier or, for many, more personal. We know all too well that COVID-19 first emerged as a respiratory disease.

Equal parts personal journey, biography and science sampler, the book weaves profiles of scientists working on aspects of human respiration and top breathing experts (like the Dutch breath guru, Wim Hof) together with the author’s gradual enlightenment. The scientists he profiles he calls pulmonauts: those willing to travel to the outer reaches of conventional breathing science for the sake of human health.

best summarized as breath badly, die early and quickly shifts to contemporary-day San Francisco, where the author finds himself in a doctor-recommended breathing class. At first annoyed and skeptical, he forces himself to cooperate and comes out feeling quiet and calm an hour later.

And so begins our journey, too, as we accompany Nestor on an expedition to scale the heights and plunge the depths of breathing science and lore. Along with the results of his own harrowing self-experimentation, he concludes that proper breathing may be our natural birthright but in the modern world, a rare prize. The consequences of improper breathing, we learn, are far-reaching and devastating to human health.

After chapters on breathing more, slowly, less, through both nostrils or only one, it’s tough to avoid feeling like we are on an adventure ride, perhaps one that is going a bit too fast and around to many curves. Mostly, we can’t help but agree that breathing well is not only the key to good health, long life and a better attitude but that an incredible number of fascinating science experiments have occurred in the name of better breathing.

Among these, Dr. Konstantin Buteyko’s story* is summarized in a chapter called Less. Nestor condenses a complex life story: Buteyko, born in Kyiv in 1923, had a spiritual and intellectual awakening when, as a doctor working late one night at a patient’s bedside, he realized his own labored breathing might not only be a result of his ill-health (Dr. Buteyko suffered from severe hypertension) but a cause. He spent the rest of his life researching and experimenting to understand the connection between health and breathing.

Ultimately, Buteyko discovered a strange paradox: breathing less transported more oxygen to the cells. The number of breaths wasn’t as important that the amount of air (less than 6 liters proved optimal). The chapter Less explores why Buteyko’s method works and reports that over 200,000 people in Russia (and thousands more in the UK, Australia, New Zealand, and the US) have benefitted from his research. Although he was mostly known for helping asthma patients, Buteyko’s discoveries are primarily about improving human health through breathing less.

In his research, Nestor was connected with Dr. Ira Packman (the Breathing Center’s Medical Consultant) as a result of interviewing Ms. Yakovleva. He interviewed Dr. Packman along with David Wiebe, a Breathing Center client from Woodstock, NY with an interesting personal journey to find a holistic treatment for his asthma.

Nestor also mentions the New York Times article about the Breathing Center which reached a huge audience and helped the Buteyko Method become known in the West.

Nestor’s interviews with Breathing Center clients resulted in stories that helped the author comprehend how effective breathing less is in practice. One of those clients was Polly who had asthma for more than 70 years and was able to stop asthma attacks after taking Level 1 training at the Breathing Center.

In his book, Nester includes Dr. Buteyko as “a pulmonaut” which is ironic because he was an MD-PhD working in a hospital and using traditional western research methods. It seems even Nestor is not quite ready or willing to accept the validity of this traditional medical doctor’s conclusions.

The heart of this story, and jumping-off point, relates to the perils of mouth breathing. Chapter 1 is entitled The Worst Breathers in the Animal Kingdom. (Spoiler: it’s humans). As Dr. Buteyko would agree, it is the failure to breathe 100% through the nose that is the most damaging (and easily corrected) human habit.

The author describes a typical scrawny specimen born in the 20th century: a formula-fed infant, learning to eat pulverized and jarred baby food, a victim of nasal congestion, adopting a diet of soft white bread and Velveeta, too many tooth extractions (he asks, how could an underdeveloped jaw that never had to chew anything tough have room for all 32 teeth?), fitted with braces and headgear as a teen â€¦ and a litany of health problems that only get worse into adulthood.

Unfortunately, James Nestor is describing himself, a typical American (and, sadly a typical modern human). As his story unfolds, he reveals that mouth breathing is the prime suspect in his own poor health.

To prove just how unhealthy mouth breathing is, he embarks on an experiment with an enthusiastic and quirky Swedish scientist named Anders Olsson. Dr. Olsson, having spent a decade studying the difference between mouth breathers and nose breathers during athletic performance, brings creditability to an otherwise ill-advised venture. The two begin a 10-day experiment of breathing solely through their mouths after getting a full baseline workup from a nasal and sinus doctor.

Nestor’s successful storytelling style is fueled by a quest for self-improvement and most readers will find his ruthless self-experimentation admirable and entertaining. He faithfully reports on the highs and lows of his attempt to mouth-breathe 24/7 for over a week. He calculates that, for starters, his snoring increases 4,820 percent and he begins to show his first-ever signs of sleep apnea. (Both he and his masochistic partner, Olsson, use silicone plugs in both nostrils).

After the experiment, a few interesting side tripsâ€”like descending into France’s catacombs to examine skulls of pre-modern humansâ€”and at least one New Age breathing class, the author has fulfilled his promise. He’s brought readers along for an eventful (if somewhat overwhelming) science adventure.

More and, Too Much?

As fascinating as the chapters about groundbreaking science (past and present) are, Breath is so packed with amazing tales of historic breakthroughs, unusual treatments, strange animal experiments, stranger human experiments, eccentric athletes and so forth, it can feel a bit crowded.

There are minor faults in this book. First, Breath is ultimately (as the Platte River was once described), a mile wide and an inch deep. The author is ambitious:  if he told the full stories of each scientist, athlete, doctor or patient he would have ended up with a dozen tomes. To his credit, and despite the information overload, Nestor is a skilled writer and reporter who is able to expertly leverage the power of popular science to convince even the most hardened skeptic that proper breathing is the #1 overlooked health habit.

The second criticism is the pace. Breath sometimes leaves the reader a bit, well, out of breath. The narrative is compelling but may leave some readers gasping as the chapters pinball between personal story and the history of breath research. As the book shifts back and forth between the details (including day-to-day rituals) of the author’s self-experiment and the biographies of various scientists, the reader feels she might have parachuted into a carnival, after dark, in full swing. Too many bright lights, fast rides, and while a good time, also a blur.

Last, the Appendix includes a comprehensive list of breathing methods associated with chapters in the book. While breathing techniques can be helpful, personal coaching is usually necessary to learn these methods safely and successfully. It may have been a better idea to include links to reputable specialists and teachers.

Overall, Nestor is a fine writer working on an interesting topic. Meditators, Wim Hof followers and Buteyko acolytes will all find new knowledge here while those who have never considered the power of breathing may become intrigued (or overwhelmed) enough to begin practicing breathwork.

This review only scratches the surface of Breath. If you are looking for an excellent primer in why breathing matters, read this book. You’ll learn more than you can imagine about all the ways humans have degraded their ability to breathe, and all the ways we can make it better.

*Nestor based his Buteyko biography following this article written by Yakovleva in 2009, shortly after she returned from a visit to the Buteyko Clinic in Moscow. The sources for the article’s biographical information about Dr. Buteyko were Ludmila Buteyko and Dr. Buteyko’s stepson Andrey Novozhilov.