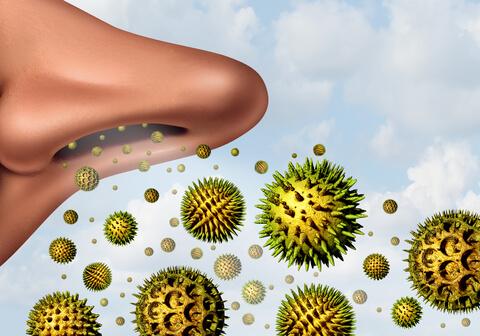 The Buteyko Breathing Method is effective for eliminating allergies without the use of prescription drugs. Both adults and children are able to overcome allergies to food, dust, humidity, dogs, cats, horses, pollen and many other triggers. As the proper functioning of the metabolism is restored, allergic reactions disappear.

How The Buteyko Method Eliminates Allergies

Doctors and scientists have been unable to determine what causes allergies. They agree that allergies are a dysfunctional response of the immune system to external stimuli such as pollen, dust, pets and other things commonly found in our environment. They also know how to control this response using medication, but without knowing what causes the immune system to react incorrectly in the first place, doctors currently cannot stop or cure allergies.

Buteyko believed that allergies are caused by over-breathing, and especially mouth breathing. In his medical practice and research, he found that all people suffering from allergies have one thing in common:  over-breathing (hyperventilation). Dr. Buteyko found that hyperventilation leads to a deficit of carbon dioxide in the lungs. Contrary to what is popularly believed, carbon dioxide plays an important part in human metabolism, and a deficiency of it causes serious metabolic problems. A compromised metabolism weakens the immune system and creates dysfunctional responses to environmental stimuli. However, when over-breathing is corrected, the metabolism and the immune system are both restored to proper functioning, allergies disappear.

Allergies can affect anyone. Charles, Prince of Wales, is a famous case. He is reported to have been allergic to the horses he rode, and even to his own parade uniform. Like many people, he tried to control his symptoms using prescription medications, as well as alternative medicine.

Nothing worked, and his symptoms persisted.  In 1999, on the recommendation of his personal physician, Prince Charles sought help from Konstantin and Ludmila Buteyko. Once he learned to reduce his breathing, he was no longer affected by allergies, and since that time, the Prince’s Foundation for Integrated Health has actively promoted the Buteyko Breathing Method as a natural and holistic cure for allergies.