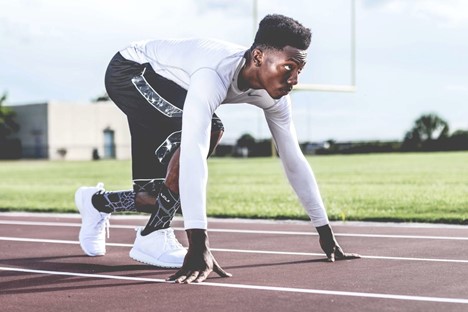 Whether you’re a runner, swimmer, quarterback, tennis player, gymnast, or any other type of athlete, unlocking optimal performance should be your top priority. As you improve your stamina, core strength, endurance, balance and coordination, agility, movement, and reflexes, you’ll perform better with each game.

However, this process doesn’t occur overnight. As an athlete, you should note that shortcuts won’t get you anywhere. Unless you’re committed to sticking to the game plan and being consistent, you’ll struggle to become one of the top players in your sport.

If you’ve been an athlete for several years, you may have heard about the importance of consistent, steady, and naturalized breathing for athletes. Athletes who breathe using their nose manage to normalize and regulate the carbon dioxide content in the body. As a result, the exchange of oxygen between the working muscles and red blood cells is improved. The body’s parasympathetic nervous system is activated, which helps conserve energy, slows the heart rate, reduces stress, optimizes performance, and quickens recovery.

As an athlete, you can train your body and mind to perform better by utilizing the right breathing strategies. In this blog, we’ll offer a closer look at the benefits of Buteyko Breathing (reduced nose breathing) for athletes. In doing so, we’ll also touch upon the harmful effects of breathing using your mouth (over-breathing/hyperventilating).

No matter what sport you play, we strongly recommend shifting your focus to the way you breathe and making consistent changes to undo a significant amount of damage. Let’s take a closer look at why Buteyko Breathing is beneficial for athletes.

1. Reduction in Weakness and Fatigue

Athletes who breathe using their mouth typically are at a greater risk of suffering from the harmful effects of long-term hyperventilation. The systemic ramifications of chronic hyperventilation are too dire to be left unacknowledged.

When an excessive amount of air is consumed through the mouth, a significant amount of carbon dioxide is removed from the body. This, in turn, reduces the overall oxygenation of the body.

The person’s airways start to spasm, which is the body’s attempt to normalize carbon dioxide levels. This deficiency also generates pH alkaline shifts in the blood and tissue cells. As a result, the metabolic processes are affected.

As the body enters a state of hypoxia (oxygen deficiency), the person feels weak and fatigued. Simply put, their body needs time to recover. As a result, they start to feel lethargic, overworked, and overwhelmed. These effects are both physical and mental.

By switching to Buteyko Breathing, this state of emergency is corrected. As athletes breathe using their nose, they stabilize and regularize air exchange in the lungs. Consequently, rapid carbon dioxide loss through exhalation is prevented.

As the level of carbon dioxide in the air sacs and blood increases, the pH also normalizes. The “state of crisis” that the body was facing is corrected. There’s no need for the airways to spasm.

As an athlete, you can practice and perform without feeling inexplicably tired or overwhelmed. In other words, your body won’t give up on you. This correction is quick as the lungs respond and recover exceptionally well.

Stress plays a big role in affecting performance among athletes. It can also increase anxiety, resulting in burn-out. While athletes are encouraged to keep their physical health on track, they’re also advised to focus on their mental health, take strong measures to reduce stress, and make time for relaxation and healthy breaks.

It’s important to note that there’s a strong correlation between stress and physical health. When a person hyperventilates because of mouth breathing, their body is constantly in fight or flight mode. By switching to nose breathing and regulating essential internal mechanisms, the body is able to relax. This significantly reduces stress.

The body’s acute stress response/fight-or-flight response is turned off. As carbon dioxide levels normalize, the nerve cells become less agitated. These changes collectively promote a healthy, stable, happy, and less anxious state of mind and being.

As stated earlier, this balance is extremely important for athletes. In recent months, two of the leading American athletes—Naomi Osaka and Simone Biles—have opened up about their struggles with mental health. Once stress is eliminated, athletes perform better as they feel relaxed, soothed, and replenished from within.

As athletes transition from mouth breathing to nasal breathing, they notice a significant improvement in their stamina and endurance. According to a recent study, nasal breathing lowers the breathing rate by 50%. It also decreases the perceived exertion by 60%.

What does this mean? Well, you can train harder, practice more vigorously, and work out for a longer duration. Your body will recover faster and you’ll be able to unlock greater levels of performance and improvement.

In other words, your body will not be holding you back. It will not be acting like your own worst enemy. With your physical and mental health on track, you’ll be able to become a better athlete.

Recommended Video: How to Breathe While Swimming

If you want to make the transition from mouth breathing to nose breathing, we recommend getting up to speed with the benefits of the Buteyko Method. As you work with a Buteyko Breathing Practitioner, they’ll help you make the most of individualized Buteyko Techniques that are right for you.

Start by taking our breathing test. In addition, explore the following resources:

If you have any questions, we’re here to help. For more insight into the Buteyko Breathing Method, explore educational materials in our store.