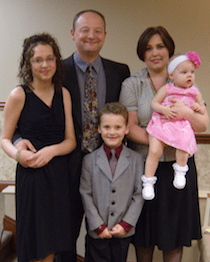 Seemingly at the end of a long and ever increasingly difficult struggle, I was certain my life would end soon. I was about to give up the fight completely, mainly from battle fatigue. I had to fight to breathe, fight to live, fight for understanding, (even among those that were supposed to understand the most). Truth be told, I was just so tired of fighting.

Most of the time, asthmatics are told to simply avoid our triggers and take our medications, and we, too, can live a normal life. That statement was infuriating to me because it just isn’t true! Avoiding my triggers meant a lonely life, inside my own home, away from people and any scents or smells (even smoke on a person’s clothing in the grocery store would send me into a weeklong asthma attack), animals, dust, the outdoors, (the list goes on and on). It meant waving goodbye to my husband and children as they had no choice but to leave me at home, while they engaged in life. Taking my medications meant being on nearly every asthma drug there is, and still fighting to breathe, while gaining an inordinate amount of weight due to steroids and the sedentary life I was forced into. I was trapped inside a failing vessel, and I felt that not only was I of no use to my family, but that I was also holding them back.

One night, I had been searching the internet for anything I had not yet tried when I came across Buteyko Breathing Center USA’s website. I was not overly hopeful (I’m chronically skeptical), but I filled in the Breathing Self-Test, and forgot about it. A few days later, after a particularly frustrating afternoon, I received a call from Thomas. I was surprised that the co-founder of Buteyko USA was calling me personally. We talked for awhile, and I cried through nearly the entire conversation. That conversation was the beginning of a profound change in my life. When we began the course, Thomas informed me that the outcome of his training would rest entirely upon me, and that it would be a commitment I would need to make to myself.

By the end of our first session, I was determined to make that commitment because for the first time, with no medication, the constriction in my chest was gone.

Later that week, I began having trouble breathing, and during a session with Thomas we talked about it. I told him how angry I was over the things that had happened in my life, and how angry I was in general at everything. He taught me that my anger and frustration was causing much of my breathing difficulty, and that it was more important to protect my freeness of breath than it was to allow myself to become upset. I had a choice and I needed to choose to let my anger go.

I am a better person for it, and my family has noticed greatly. For this one aspect of the training, I will remain forever grateful.

I have not used my inhalers in a month, when before, I used them several times a day. My breathing is no longer my enemy, I am MUCH calmer, my sensitivity to smells is decreasing, my energy is returning, and my allergies seem to also be easing. So, not at the end anymore, but instead at the beginning, of an ever decreasingly difficult struggle, I stand eternally grateful to Thomas and Buteyko Center USA, and to those that taught my teacher, for giving me the tools to not only take back my life, but to make it even better.