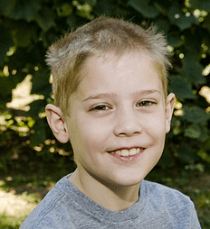 In September I took my 8 year old son Daniel to an Ear, Nose and Throat Doctor because he had been experiencing headaches, frequent earaches, pain in the back of his throat and he was having trouble breathing. He told us that Daniel’s adenoids were enlarged and would have to be removed. At first I felt somewhat relieved, because his breathing was gradually getting worse and I was worried he might develop asthma.

His surgery was scheduled for October, and I was hoping that he would be back to good health for his birthday in December. Out of curiosity, I did a web search for alternative adenoids treatments and stumbled upon the Adenoids without Surgery Program taught at Buteyko Breathing Center. So I called and spoke with Thomas Fredricksen, who explained to me that enlarged adenoids are the result of chronic hyperventilation (over-breathing). I decided to sign up for Buteyko Breathing Normalization course because I learned that adenoids can come back even after surgical removal. Thomas described that practicing the Buteyko Method will effectively and permanently treat enlarged adenoids without the risk of putting Daniel through multiple surgeries at a young age.

So I postponed Daniel’s surgery in order to try the Buteyko Method and see if it would work. We soon started working with Jesse Steinberg at Buteyko Breathing Center in Woodstock, NY. Jesse connected with us right away and explained the theory of the Buteyko Method then led Daniel and I through some Buteyko breathing exercises. On the ride home from the first session I noticed that Daniel’s breathing was not as noisy as usual, and he said that he had fun learning with Jesse.

We continued working with Jesse and at home I would guide Daniel through the breathing exercises. Sometimes it was difficult to get him motivated, so we had to take a creative approach. Day by day, his symptoms began to dissipate! Two weeks later, we saw the E.N.T. again. He was surprised to find that Daniel’s nose was now in much better condition (it was now clear with no discharge), as were his ears and throat. His adenoids were still enlarged at that point but surgery had become optional! I was so thankful!

Daniel has since lost his symptoms, is generally calmer and more focused, no longer has headaches, and now has healthy quiet breathing. And, on the last visit to the E.N.T., he said surgery is no longer recommended! I am so grateful to Jesse and Buteyko Center USA, you have helped my family in a way that I didn’t think possible!