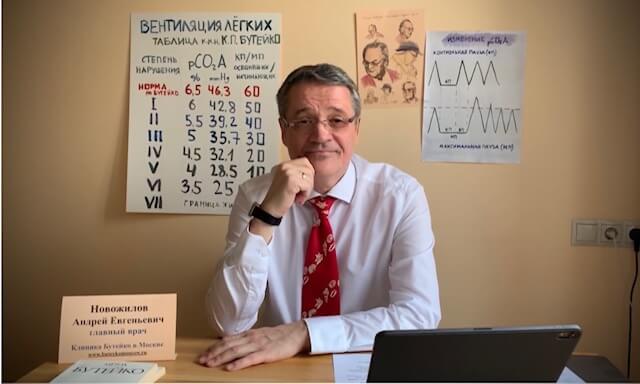 Dr. Andrey Novozhilov, who was raised by Dr. Buteyko, is the only true authority of the Buteyko method.
His mother, Ludmila Novozhilova-Buteyko, was Dr. Buteyko’s wife and his strongest advocate. Andrey met Dr. Buteyko When He was nine years old. At that time, his mother was suffering from severe Asthma and breast cancer; she already had three clinical deaths. Due to her steroid treatments, this 28-year-old stunningly beautiful woman became obese and unable to focus. Since she was not capable of learning the Method, Dr. Buteyko taught Andrey how to help his mother. Following her son’s guidance, Ludmila was able to breathe again; she lost weight, became healthier and functional. Inspired by the healing power of reduced breathing, she began teaching it on her own. A few months later, she met Dr. Buteyko again and became his kindred spirit; they spent thirty-five years together.