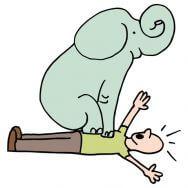 Did you notice Donald Trump‘s breathing during his inauguration speech? I need to admit that when I watched his speech on TV, I did not pay attention to his breathing. Then one of my students told me that surprisingly Mr. Trump was breathing through his nose while delivering his speech. Not an easy skill for someone who does not practice Buteyko Breathing Normalization!

Several years ago, I wrote a blog about Michelle Obama’s breathing. Her breathing style seemed to be impeccable! Much better compared to many people who have learned the Buteyko Method and even some of those who teach it. When Michelle Obama gives a speech, most of the time she breathes through her nose, and even when she does not, her breathing remains gentle, inaudible and does not trigger any movements of her shoulders, chest or stomach. It can be considered as a good example of Buteyko’s reduced breathing.

I also checked on Barack Obama’s breathing during his Farewell Address in Chicago. His breathing was very good, almost flawless with the exception that once in a while he would draw in a tiny breath through his mouth. Not a big deal!

It seems that now many politicians receive training on how to practice healthy nasal and therefore reduced breathing. Obviously, some advisers realize that it is an essential skill for anyone who gives public talks, especially for large audiences. Nasal breathing during speaking, as many of you already know, prevents hyperventilation, helps to preserve energy and protects from various viruses. On top of it, a person practicing this type of breathing always appears calmer and more balanced.

However, if you are not truly calm and balanced, it might be difficult to maintain this type of breathing all the time. For example, observing Trump’s inauguration speech, I noted that his breathing was changing throughout it becoming increasingly heavier. At the end, he was inhaling primarily through his mouth and his inhalations were noticeable. It is understandable. If you look at Trump’s pictures, you would see that often his mouth is widely open – he definitely does not breathe like a little mouse.

On the other hand, Michelle and Barack Obama’s breathing does not seem to be very different off stage. Something for many of us to learn from them!

There is another thing about breathing, which I’d like to mention in regards to the current political situation full of uncertainty, apprehension and fear. During last week, I noticed that the breathing of some of my students became heavier. During our sessions, two of them displayed chest breathing â€“ a type of frequent, shallow respiration, which often accompany anxiety. An unhealthy kind! Talking to them, I understood that as many other people, they were affected by recent political changes in the country. Is this justifiable? Of course! Is hyperventilation triggered by stress acceptable? I don’t think so!

It is unacceptable since hyperventilation decreases the level of CO2 in lungs, lessens overall oxygenation of the body and negatively impacts the function of metabolism, immune, nervous, cardiovascular systems and others. In short, it damages our health. This is according to Dr. Buteyko’s discovery and the work done in Clinica Buteyko in Moscow by Dr. Novozhilov and other members of his team. Many doctors and scientists around the world have also confirmed this conclusion.

When situations become nerve-racking and worrisome, it is vital to control your breathing. In fact at that time it becomes much more important! Healthy
breathing stops the train wreck effect created by stress, which eventually manifests as a disease. Remember, there is no health without healthy breathing! So, do not let the misbalance of the world create misbalance of your own heath.

Would you like to learn how to reduce your air consumption through relaxation? How to stop hyperventilation, anxiety and panic attacks? Breathing Normalization Mediations will help you to learn how to breathe less.