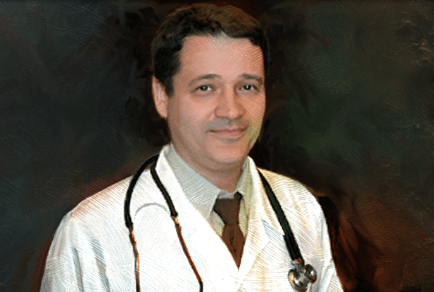 COVID-19 can be stopped at an early stage of development and prevent acute respiratory distress syndrome (ARDS), which is the leading cause of death, regardless of the patient’s age or associated chronic diseases.

The cause of Acute Respiratory Distress Syndrome (ARDS)

Acute respiratory distress syndrome (ARDS) is developed as a result of a strong immune response to virus invasion and the onset of acute diffuse pneumonia.

In the initial (exudative) phase of diffuse pneumonia, anti-inflammatory substances are released that damage the capillaries and alveoli. As a result, the exudate penetrates the alveolar air space, which damages the lungs and disrupts gas exchange.

Activation of the immune response by the virus and high release of anti-inflammatory substances are some of the causes of acute lung damage and the development of ARDS.

It can be assumed that a decrease in the early stage of diffuse pneumonia activity will reduce the strength of the immune response to virus invasion and thereby prevent acute respiratory distress syndrome (ARDS).

There is also an opportunity to prevent the activation of the immune response with the help of drugs – immunosuppressants, and today there are drugs – corticosteroids, which have anti-inflammatory effects and the ability to inhibit the immune system depending on the dose and duration of their use.

Anti-inflammatory and immunosuppressive effects of corticosteroids

Anti-inflammatory effect of corticosteroids in low-dose

The therapeutic use of corticosteroids in small doses that do not inhibit immunity in the early phase of acute diffuse pneumonia (due to their anti-inflammatory effect) reduces the intensity and speed of the inflammatory process, which reduces the likelihood of a strong immune response with the development of acute distress syndrome.

Immunosuppressive and anti-inflammatory effect of corticosteroids

It is also known that high doses of corticosteroids with relatively long-term use inhibit our immunity. It allows to use them as immunosuppressants with a powerful anti-inflammatory effect in the initial phase of use.
For example: more than 20 milligrams per day of Triamcinolone in tablets (more than 5 tablets) during 1-2 weeks or more.

Correction of the dose of corticosteroids should be made daily in the direction of increase or decrease according to “clinical need”.

If there is a risk of secondary bacterial infection, the use of appropriate antibiotics is justified.

The value of normalization of the constant alveolar CO2 (pCO2A )

Over the course of several decades, we have been observing an undoubted anti-inflammatory effect resulting from the normalization of external respiration function and CO2 pressure in the lungs in patients with various types of inflammatory respiratory diseases.

Based on this, it can be assumed that, at an early stage of COVID-19 disease, it is possible to prevent the development of acute diffuse pneumonia under the condition of complete normalization of the partial pressure of carbon dioxide (CO2) in the alveolar air of the lungs (pCO2A) according to the method proposed by Dr. Konstantin P. Buteyko (MD, PhD) more than half a century ago.

Long-term clinical observation proved undoubtedly that CO2 normalization, the key constant of the process of homeostasis, generated a strong anti-inflammatory effect, which is needed in the treatment of various inflammatory diseases of airways.

For example, partial normalization of pCO2A to 32 millimeters of mercury (at a norm of 40 mm Hg) allows in a short time to eliminate bronchial obstruction, asthma and to cancel drug treatment. It becomes possible as a result of a decrease in the activity of allergic inflammation of the bronchi, which could be aggravated by viral or microbial infection.

CO2 measurement in the lungs

To measure alveolar CO2 (pCO2A), Dr. K. Buteyko proposed a simple method, according to which the duration of a spontaneous delay in breathing after exhalation (if performed without volitional effort) exactly corresponds to a certain value of CO2 in the lungs.
A reliable indicator of the lack of the volitional effort when holding a breath is the normal depth or the normal amplitude of the first inhale after it is completed.

The duration in seconds of breath-holding allows determining CO2 in the lungs according to a special Buteyko table (in volume percent or millimeters of mercury – mm Hg).

The duration of breath-hold of more than 45 seconds, if it is performed without volitional effort, corresponds to the normal pressure of CO2 in the lungs (40 mmHg), and then it is impossible to determine any signs of inflammatory disease of the respiratory system.

The cause of CO2 deficiency in the lungs

The main reason for the decrease in CO2 in the lungs (alveolar hypocapnia) is pulmonary hyperventilation, the elimination of which allows you to quickly normalize the constant of CO2 and successfully treat inflammatory diseases of the respiratory system of any origin.

A clinical sign of excessive ventilation of the lungs and alveolar hypocapnia are bronchial obstruction resulting from a decrease in pCO2A of less than 28 mm Hg and arterial hypertension resulting from peripheral angiospasm.

The methods of CO2 normalization in the lungs using Buteyko

In order to eliminate hyperventilation and normalize CO2 in the lungs, Konstantin. P. Buteyko proposed a simple method, based on a slight decrease in the depth (amplitude) of breathing with volitional effort in order to create a feeling of a slight lack of air for 1-2 minutes.
It is also possible to normalize CO2 in the lungs using a series of short breath holdings after exhalation, performed with a slight volitional effort.
A positive result is the elimination of negative symptoms of the disease or an undoubted increase in the duration of breath-holding during 5-10 minutes of exercise, which indicates a partial elimination of CO2 deficiency.

For example, the patient is offered to perform a series of short breath holdings of not more than 5 seconds after exhalation with an interval of at least 1 minute.
In our practice, there was a case of the complete elimination of the symptoms of the long-term bronchial obstruction within two weeks when the patient performed over 200 short breath-holds 5-10 seconds long after exhalation during each day.
Another way of Buteyko self-studying implies reducing the depth of breathing in an easily tolerated volume with the help of the slight effort within 1-2 minutes after a short breath-hold not exceeding 5-10 seconds and performed after exhalation.

The treatment method proposed by Dr. K. Buteyko and based on the normalization of external respiration has two features:
A / elimination of hyperventilation of the lungs is carried out by the patient himself using volitional effort, since, for example, inhaling a gas mixture with a high content of CO2 has many nuances and does not give the expected effect due to the preservation of pulmonary hyperventilation;
B / given the certain technical complexity of normalizing breathing as a method of treatment, the teacher of the Buteyko method should have the confirmation of his/her proficiency and qualification directly from me as a co-author of the invention and copyright holder.

Respiratory failure in COVID-19 and ARDS: prevention and treatment

Fragmentary death of the lungs during the development of acute respiratory distress syndrome (ARDS) significantly reduces the gas exchange area. Nevertheless, even a small amount of preserved lung tissue can satisfy the metabolic needs for breathing in the absence of elements of bronchial obstruction and normal pH of arterial blood.
The occurrence of bronchial obstruction and the maintenance of blood pH is regulated by the pressure of carbon dioxide in the lungs and blood, respectively.

Hyperventilation of the lungs, a characteristic feature of the acute phase of respiratory disease, creating a deficiency of CO2 in the lungs, provokes a different degree of bronchial obstruction – edema of the bronchi, hypersecretion of mucus and latent bronchospasm, which creates uneven ventilation and reduces the area of gas exchange.

In the initial stage of the disease, oxygen deficiency in cells (cellular hypoxia) is not associated with lung damage or disturbance of gas diffusion, therefore it has a functional aspect. It occurs as a result of hyperventilation of the lungs and is accompanied by cellular, arterial and alveolar hypocapnia – carbon dioxide deficiency in cells, in the blood, in the lungs.

Arterial hypocapnia changes the pH of arterial blood and disrupts the ability of oxyhemoglobin to dissociate, which provokes cellular hypoxia.
At this stage of the disease, the elimination of pulmonary hyperventilation according to the method proposed by Dr. K. Buteyko allows to normalize gas exchange and to eliminate cellular hypoxia without any particular difficulties.

Otherwise, chronic hyperventilation of the lungs and alveolar hypocapnia will cause the bronchial obstruction and decrease the efficiency of gas exchange, and the subsequent damage to the lungs as a result of a strong immune response to the virus invasion will cause cellular and arterial hypercapnia and hypoxia.
At this stage of the disease, it is critically important to normalize external respiration and eliminate hyperventilation of the lungs according to the method proposed by Buteyko, which will eliminate the bronchial obstruction and normalize gas exchange through intact areas of the lungs.

Elimination of bronchial obstruction normalizes gas exchange through the healthy areas of the lungs and allows you to effectively fight hypercapnia; and subsequent normalization of blood pH normalizes the dissociation of oxyhemoglobin, and it allows you to successfully fight cell hypoxia in patients with extensive lung damage, in patients with extensive pneumosclerosis or severe bronchial asthma.

Limiting the effectiveness of mechanical ventilation

Otherwise, with the acute hypercapnia, a persistent deficiency of alveolar CO2 will cause extensive bronchial obstruction, uneven ventilation, additional changes in blood pH and the breakdown of oxyhemoglobin, followed by an increase in acute tissue hypoxia. It may lead to the accelerated development of pneumosclerosis as a compensatory reaction of respiratory homeostasis.

Limiting the effectiveness of oxygen therapy

The breath of a gas mixture with a high oxygen content is intended to increase the saturation of arterial blood and body cells with oxygen.
However it is known that blood is always, and under any condition, completely oxygenated even with a significantly diminished area of the ventilated surface of the lungs, and all hemoglobins, which is a physical carrier of oxygen, is occupied.
The lack of free hemoglobins does not allow to increase the percentage of blood oxygen saturation, and a slight clinical effect may be caused by an increase of oxygen in the blood plasma.

Resolving the problem of respiratory failure

It turns out that to eliminate cellular hypoxia, arterial hypoxemia, cell and arterial hypercapnia, it is enough to normalize external respiration according to the method proposed by Dr. K. Buteyko.
In the absence of lung damage, gas exchange is normalized as a result of elimination of elements of latent bronchial obstruction, normalization of blood pH and normal dissociation of oxyhemoglobin.
If the lungs are damaged, gas exchange is normalized through healthy areas of the lung tissue and will be sufficient for normal metabolism, provided there is no latent bronchial obstruction and if you have normal arterial blood pH.

It should be remembered that you need to breathe exclusively through the nose while relaxed as well as while doing physical activity, particularly when doing sport.
The nose performs three essential functions: the air warms up, the air is disinfected, the air is moistened.

Years-long analysis in cases of disease incidence has convincingly shown that the main reason for the spread of viral infection is breathing through the open mouth.
For example, children, in the process of treating bronchial asthma according to the method proposed by Buteyko, form a persistent habit to breathe through the nose, especially when doing physical exercises. It reduces the number of cases of acute respiratory viral infection (ARVI) and influenza by 50% in a short time.