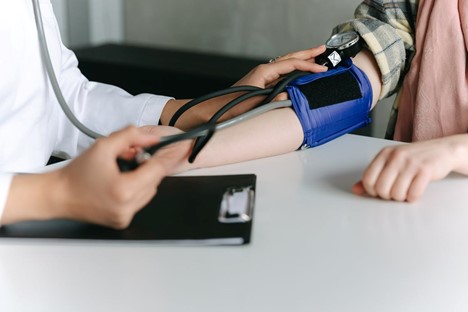 According to research, high blood pressure (hypertension) is one of the most common health conditions across the US.

An Overview of High Blood Pressure

Many people dismiss the critical nature of high blood pressure. It’s important to note that this condition opens the pathway to heart disease. If left uncontrolled, high blood pressure puts people at risk of suffering from heart failure.

We recommend checking your blood pressure regularly or weekly at the very least. This is imperative because the symptoms of high blood pressure (headaches, chest pain, dizziness, shortness of breath, etc.) don’t manifest until the person’s blood pressure is exceptionally high. Owing to these variations, frequently checking the numbers is essential.

As an all-natural approach to breathing, the Buteyko Technique helps people adopt healthy nasal breathing patterns. As people ease out of excessive breathing/hyperventilation and ease into natural, well-paced, and effortless nose breathing, their health significantly improves.

Among the many health benefits of Buteyko Breathing, its ability to lower blood pressure stands out. How is this achieved? In this article, we’ll break down the basics to help you understand how Buteyko Breathing can improve your cardiovascular health. Continue reading.

Recommended for You: Take the Breathing Test

The Prevention of Over-Breathing

As a result, the person begins to suffer from chronic oxygen deprivation. Hemoglobin molecules in the body hold onto oxygen tighter and fail to sufficiently release it to the rest of the body. As the body enters a state of oxygen starvation and carbon dioxide loss triggered by over-breathing, the organs fail to receive enough oxygen. Consequently, the body increases blood pressure to adequately supply oxygen to various organs. If this process occurs frequently over time, the person may suffer from atrial fibrillation, i.e., an irregular and abnormally fast heart rate.

By normalizing the body’s oxygen and carbon dioxide levels, Buteyko Breathing helps undo the damage. As a person breathes calmly, silently and consistently through their nose, they’re not at risk of losing an excessive amount of carbon dioxide through exhalation. As carbon dioxide levels in the air sacs and blood increase, the pH also goes down and normalizes.

The state of crisis is over. Constrictions are released and the lungs recover incredibly well. As the person adopts relaxed breathing patterns through their nose, their blood pressure is lowered.

This has also been proven through research. According to a study published in the National Library of Medicine, nose breathing prevents the respiratory system from being overworked. As a result, the systolic blood pressure is lowered.

When a person over breathes (hyperventilates), their respiratory system is overworked and exerted beyond its capacity and capability. Consequently, the blood pressure can rise and put the person at risk of suffering from heart failure. Buteyko Breathing Techniques effectively normalize a person’s respiratory, cardiovascular, and pulmonary functioning.

Activation of the Parasympathetic Nervous System

As people alter their breathing patterns using the Buteyko Breathing Method, their parasympathetic nervous system is activated. This system is responsible for slowing and normalizing breathing rates, lowering blood pressure, and increasing digestion. In other words, it combats the sympathetic division when a person faces a stressful situation.

It’s important to note that people who over-breathe using their mouth are almost always in a “stressful situation.” Their oxygen and carbon dioxide levels are significantly lower, which puts their body in a 24/7 fight or flight mode. This can be extremely dangerous, as highlighted above. Buteyko Breathing activates the parasympathetic nervous system, which helps reduce blood pressure and helps the brain relax.

How Can I Get Started?

If you’re prone to over-breathing through your mouth, we recommend switching to nose breathing. At Breathing Center, we can help you get started. We help people understand the importance of Buteyko Breathing and implement Buteyko techniques in their life.

For more insight into the Buteyko Breathing Method, explore products in our store.