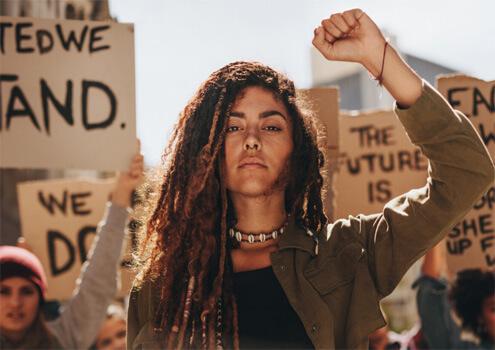 Riots and uprisings have been in most people’s minds during this week. Watching news, I noticed protestors breathing heavily often through their mouth, and also police officers breathing the same way. Without any awareness, both sides were actively wounding their respiration and overall health, making themselves more susceptible to Coronavirus. Do you know that everyone is given a choice to breathe as though you are in heaven or in hell? If not, I hope my article below will help you to realize this. Speak Your Truth But Do Not Wound Yourself!

Abraham, my seventy years old client from Texas, was a respected family man, and a devoted Christian. Despite our differences, we connected well. Abraham was applying the Buteyko method effectively, gradually approaching his goal of overcoming his sleep apnea, high blood pressure, and fatigue. By the end of our two-month-long program, his Positive Maximum Pause was around 40 seconds. I noticed that his lighter breathing not only strengthened his health but also uplifted his spirit: during our sessions, he made jokes and often caused himself to burst into laughter. Near the end of our course, I had to travel and needed to postpone our final session.

We will meet in a month, I told my client.

Perfect! Abraham replied enthusiastically. It will give me extra time to practice intensely. When we meet again, you’ll be impressed!

Upon my return, I was excited to see my client and check on his progress. When Abraham’s face popped up in our online meeting, I hardly recognized him. Dark lines circled his eyes; he was breathing as if he had just been running. He told me that his insomnia and fatigue had returned.

I measured his Positive Maximum Pause. It was only seven seconds â€“ almost as low as it was when we began our program.

What is going on in your life? I inquired.

Waiting for his answer, my mind generated unexpected images and thoughts revealing what might have happened. His nephew, who was gay, came out of the closet. His extended family did not take it positively. To justify, this relative blamed Abraham for something (which could or could not have happened) when he was a child, and, by his nephew’s judgment, congealed his tendency to become homosexual. This allegation was excruciating for Abraham and was also ruining his reputation.

My imagination just got wild! â€“ I told myself, and ignoring my odd thoughts, addressed another question to my client:

Did you stop exercising in a gym?

Yep, He answered crossly. Then, he decided to respond to my first question: Something happened in my extended family, Abraham uttered and sighed heavily. Don’t even ask me what! He swallowed a big chunk of air. All I can say, it’s devastating, humiliating, and cannot be repaired.

This calamity erased the positive outcomes of Abraham’s Buteyko work and enabled his ailments. From my perspective, this was unacceptable.

During challenging times, I told Abraham, the need for peaceful breathing is even greater than when your life feels stable. Breathing patterns carry messages to the brain and the rest of the body. Stressful breathing starts a domino reaction disrupting the balance of your entire system. No matter how bad your situation is, you must breathe as if everything is alright. This will shield your health.

You don’t understand! Abraham raised his voice. The situation is awful! And, I cannot fix it!

My job is to be concerned about your breathing, not about your situation, which, I understand, is really difficult. I paused and then came up with an idea.

Look around, I suggested. You are sitting in a beautiful house in front of your computer. At this moment, it is quiet and peaceful there. Notice this and allow your respiration to reflect that everything is alright at this moment.

The problem is that you don’t understand! Abraham asserted. His chest and belly were moving actively with every breath. Everything is not alright! I have no reason to breathe peacefully!

Having run out of arguments, I switched to leading Abraham through breathing exercises. One nostril breathing and humming slowed Abraham’s respiration and increased his Positive Maximum Pause. Hopeful, I offered my client an additional session. Abraham became less tense and promised me to work on his breathing.

In a week, I met with Abraham again. He shared that he has been having quarrels with his family and began experiencing migraines. He was still breathing heavily, mostly through his mouth, and believed he had a good reason to respire this way. How can I change this?

Listen, Abe! You are like an alcoholic, I told him.

He wrinkled his forehead.

What do you mean? I’ve never had a drop of alcohol except during holy communion.

Over-breathing is an addiction analogous to alcoholism; it damages your body, mind, and spirit. Alcoholics often find an excuse to drink, just like you found an excuse to over-breathe. Let’s say an alcoholic became sober for a couple of months, but then began drinking again because something tragic happened in his life. Is this justifiable?

Abe widened his eyes. No, it is not!

Finally, something worked! This comparison forced Abraham to collect himself. Once again, he began calming his breathing and improving his health.

I never discovered what really happened in Abraham’s life, but this wasn’t important. My work with him helped me realize that we always have a choice of what path to take by electing how to breathe. At every moment, our free will grants us an opportunity to improve our breathing, wellbeing, and life or to worsen it. Everyone has a choice to breathe as if they are in heaven or hell, and no one can take this choice away from you. If you take full responsibility for the way you breathe, then there is no justification for over-breathing. If hyperventilation is present, you need to keep making efforts to calm your breath and improve your lifestyle.

Recently, the memory of my work with Abraham has been popping up in my mind frequently. The reason for this was that I have been meeting with my online clients whose breathing patterns were reminiscent of Abraham’s when he was highly stressed. Many of them were affected by COVID-19 – some lost their jobs, some felt breathless, some experienced panic attacks, and most had difficulties coping with the uncertainty of the situation. They all had solid reasons to over-breathe but would often forget that there is never a good enough reason for it. I had to remind them that during these trying times, it is vital to protect the harmony and balance of our inner environment (called health) by generating peaceful breathing patterns. Fortunately, the Buteyko Method offers us an arsenal of tools for achieving this goal.

Gentle, healthy respiration typically has a strong positive effect not only on a person practicing the Buteyko Breathing Method but also on everyone around them, since we affect each other by our breathing patterns. The hell-like breathing patterns (heavy and through the mouth or fast and shallow) are not only dangerous but also contagious and can spread as quickly as Coronavirus. They set our minds and homes on fire. It is each individual’s responsibility to keep such patterns under control and continue making an effort to breathe like you are in heaven even if your situation is close to unbearable.